That's What She Said: Women's magazines

There’s a meme trending showing a girls’ magazine cover next to a boys’ magazine cover. The difference in the covers is sharp: the girls’ magazine seems to assume that girls are only interested in how to look good and how to catch a boy’s interest. The boys’ cover is focussed on success, science and adventure. I know which one I’d want to read!

The one with the fashion tips. Cuz actually the boys’ magazine looks super boring – science? Meh.

So yes, I am openly admitting that I am a fashion-magazine, pretty dress-loving, obsessed with make-up feminist. 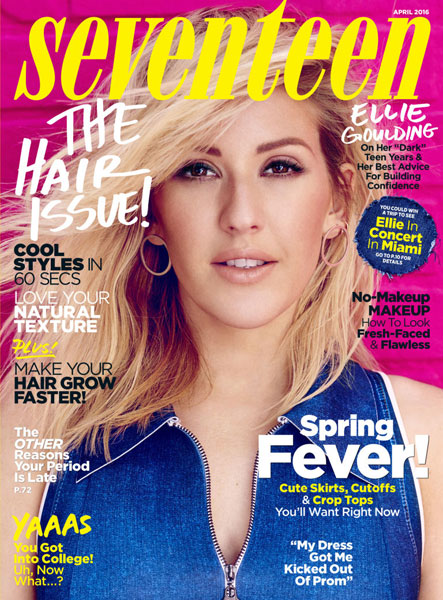 A Seventeen cover from earlier this year.

I was about eleven the first time I bought a fashion magazine. I started off with Seventeen because I wanted to prepare for my high school years. I had already screwed up my junior years with my dorkiness and blatant poverty but high school? That still had potential!

Between the glossy covers of Seventeen, there were articles about “most embarrassing moments in school” which seemed to be written by the staff writers trying to imagine what girls found embarrassing, “a tampon rolled out of my purse!”; “my crush overheard me talking about how hot he is” or “one of the boys saw my bra strap – omg!” These embarrassing moments were nothing like the real ones I was experiencing: my mom bouncing a cheque for my school jacket, finding out that the guy I’d been flirting with for months was my second cousin, and being excluded from Home Ec cooking groups because I kept eating the food before it was done.

I got bored with Seventeen and moved onto Cosmo. I’d like to say it was the fashion shoots but we all know it was the sexually intriguing covers like “Ten ways to please him on his birthday!” (None of them had to do with buying him the biggest ice cream cake, by the way.) These writers wrote about sex openly and with abandon. I imagined the Cosmo office as nothing but cushions and swings and sequins. The sex advice was quite diverse: “Experiment!”; “be brave!” and “seek out new places” as if young women were sexual astronauts.

The fashion shoots were my next obsession. I studied the pictures of the tall emaciated models, usually while eating a bag of chips. “Someday I’ll look like that,” I assured myself, even though it was quite clear that I was never going to grow past 5”4 or give up potato chips.

The clothing choices were rather unrealistic. Who would pay $2000 for a dress and $3000 for a pair of shoes? Even the gaunt thirteen-years-old supermodel wearing the clothes couldn’t afford them. But that didn’t stop me from dreaming: “Someday I’ll be able to afford those clothes,” I assured myself. Even at my current age, however, I would rather punch myself in the face before I wasted that much money.

But these magazines were more than sex tips and horribly wasteful clothing choices. Towards the back of the magazine, I found something I hadn’t been looking for, articles that could only be called “serious journalism.” There were articles about the prosecution of war crimes in Sarejevo, murders of abortion clinic doctors and a New York City court that only handled sexual assault crimes. Newspapers and the nightly news were not discussing these issues. If I had not picked up that magazine, I would never have known about the struggles of women around the world, struggles that we all shared.

There were profiles on women like Maya Angelou, Gloria Steinem and Margaret Thatcher. The funny thing about Steinem was that the only things I’d heard about her was that she was a “man-hating feminist with hairy legs.”  Before I even knew what feminist was, it was already associated with hate and, oddly enough, body hair. But through these magazines I learned that she was a thoughtful and sensitive writer who had challenged male power structures. Reading these magazines taught me more about being a feminist than anything else ever has.

Now a days, magazines like Marie Claire and Elle are writing about the US Election and informing women about the candidates perspectives on “female” issues such as equal pay, maternity leave and not having to tolerate being called “fat pigs” by orange men with the muscle to fat ration of a melting fudgesicle – or any person.

Canadian fashion magazines are no slouches. First Nation’s activist and Mrs. Universe, Ashley Callingbull has ended up on the cover of Flare. And it was in More magazine that I learned about Kim Pate, a Canadian lawyer who works for the Association of Elizabeth Fry Societies and advocates for the fair treatment of inmates and who has been one of my heroes ever since.

Fashion magazines have their problems, that’s for sure. But I think you should look beneath the shiny cover before you dismiss them with a hastily shared meme.