That's What She Said: The train wreck that is American politics 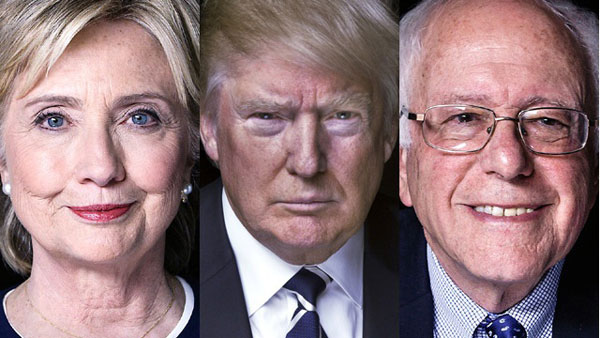 The trainwreck that is the upcoming American presidential election: you just can't look away.

America is on what appears to be year ten of its current election cycle and the candidates have been reduced to Donald Trump, an orange-skinned man with an obsession with gold (has anyone checked his birth certificate to see if he’s a leprechaun?); Bernie Sanders, an elderly man who dreams of taking apart the banks with his bare hands and Hillary Clinton, a woman with the grit and determination of jealous girlfriend trying to unlock her boyfriend’s phone.

The war between Bernie and Hillary is its own battle unto itself. Her supporters declare that Bernie supporters are inherently misogynist. The “Feel the Bern” supporters point to Hillary and her husband’s political baggage, connections to Wall Street and general look of corruption. Its true middle aged people with money just look corrupt – I think it’s the self-tanners and comfortable shoes.

I was on the fence about this election. There was no Obama, no witty handsome dude with a talent for speeches crammed full of so many big words that it left this English major breathless.

So then between Bernie and Hillary – the only important quality appeared to be who could beat Trump. But after watching the last few months of election coverage, I’m now recommending a different quality take the lead: blandness of personality. I’m tired of political candidates who capture the media’s attention with grandiose gestures, nasty insults and policy statements that appear to be written on the fly.

No, you can keep your charismatic personalities and flashing smiles and evocative eyes. Give me the candidate who wouldn’t recognize great oration if it punched her in the face. Give me the plodding campaigner whose smile has a shelf-life of about fifteen annoying people. Give me the boring smart person who feels more at home in front of a bunch of law books than sitting on a couch next to Jimmy Kimmel.

Personality has had its day. Celebrities provide us with portrayals of their perfect existence and try to convince us that “they just woke up like this.” They claim to run huge corporations without giving credit to the people doing the actual grunt work while they pick out paint colours for the foyer. People now believe that they can do anything they want without having do all the hard work that comes along with it.

I’ve read one of Hillary’s books and one of Trump’s. Actually to be perfectly accurate, I read Trump’s Art of the Deal in a couple days and I began Hillary’s book and tried over a course of two weeks to read it before giving up.

Trump’s book was the kind of book that riled you up and makes you think – “look at all I could do with my life if I took risks!” But then a few hours into planning your takeover of McDonald’s you realize, “wait, I kind of need a million dollar inheritance to get this all started.” He does have an ability to draw you in and make you think that anything is possible. But then if you step back and think – he’s basically acting like life is an episode of Dallas and that there’s no such thing as legislation or legalities or basic human rights.

Hillary’s book, Hard Choices, was the size of the bible and about as engaging as a long sermon in a hot church. Every inch of text was crammed full of her activities. It was like reading an insecure employee’s report on activities. It was so long that the Hard Choice was deciding whether to continue reading or to live a normal life.

Hillary comes off as fake which is the irony. Because I think she is real. She’s angry and ambitious and hard working and mean and hurt and wants to do a good job. Trump and Bernie supporters say that their candidates are real and that’s what they love. But you know what they say – If you can fake sincerity…

Bernie has a lot of great ideas – many of which are shared by stoned university hipsters. Trump has a lot of ideas – most of which are about as sane as letting a gorilla babysit your toddler. Hillary may not be capable of grand-scale reform or transformative change but she’ll keep America running and maybe that’s all we can ask for at this point.