Let me put on my cranky pants, with suspenders, as I rant about something that really winds me up. Kid’s shows these days are superficial crap piles that build unreasonable expectations into the minds of preteens. Check out the shows produced by the American networks – the actors are so preternaturally good-looking they could be vampires.  (Have you ever seen Zendaya? She’s basically a young, less homicidal, Naomi Campbell.) Their hair is so perfectly styled that a hurricane couldn’t disrupt it. There may be one kid who weighs slightly more than normal Hollywood weight – but that’s the designated “funny one.”

Now I know the producers have thousands, maybe even millions, of child actor reels from which to cull their genetic winners – but the kids watching don’t know that. They may think that’s how people their age are supposed to look.

And do not get me started on the shows’ content. The kids on these shows don’t have normal problems – they’re all recording artists, running their own clothing stores or insanely wealthy from some indeterminate source. Whose reality is that? The children of the 62 people who control 85% of the world’s wealth? Despite the fact that the characters are dripping with privilege, the writers expect us to believe that these kids are normal and, even …sympathetic. That they’re just regular kids who sometimes feel bad and need their friends to help them out of jams – like that time they accidentally mistook an oil Sheikh for a hair stylist. Don’t you hate it when that happens to you?

Back in my day, we had kid shows that taught us morals, values and that a good story could trump Canada’s pathetic production values.  Take Degrassi, for instance. Now I’m not sure which incarnation of Degrassi that my siblings and I used to watch after school but the kids in that show could have been plucked directly from my school. They had pimples, weight problems, and crappy clothes. Some had extreme hairstyles – Spike, so named for her spiked hair – but for the most part they had the same bad hairstyles that we were all striving for at the time (a tiny satellite dish of hair in the centre of your forehead.)

The stories on Degrassi were realistic. The kids in the show were experimenting with things that sometimes were bad for them – which is where the writers punished them quickly and ruthlessly. Spike had unprotected sex – boom, she was pregnant! Shane tried drugs – boom, he was brain-damaged! I’m glad none of the characters experimented with an Ouija board or their head would have been rotating like an owl for the rest of the season (though realistically with a Canadian budget, they would have replaced the actor with a real owl.)

After Degrassi was over, we were subjected to another Canadian masterpiece – The Littlest Hobo, about a German Shepherd who didn’t wanna settle down (maybe tomorrow?). Each episode, this philandering canine would stop at a place, befriend a kid and their family, and solve a crime. It helped that the criminals always articulated their entire plan out loud while the littlest hobo lurked nearby. Once he knew the details, this pet detective wouldn’t run and tell like some snitch (ahem, Lassie), he would thwart the crime using his own ingenuity. In a few episodes, he actually untied people with his mouth! I have fully functioning fingers and I can’t even untie people – or a dog, ironically. 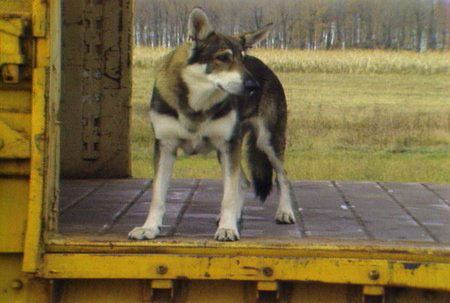 Then at the end of each episode, the kid would yell: “Hey Blue” (they always gave the dog a stupid name), “where you going?” But the dog hobo would trot away without looking back. I always thought the fact that he left was mean – there’s a whole generation of kids out there with German Shepherd trust issues.

What a lot of people don’t know is that five different dogs actually played the Littlest Hobo. After the series ended, four of them wasted their TV money and died broke and alone in tenement doghouses.

Back in my day, kid shows were humble; the focus was on story, not on the wardrobe budget. So, when you turned off the TV for dinner you felt like you were a normal person having a normal life … albeit with a mediocre dog that couldn’t even solve a simple B & E.