That's What She Said: Kiwi Baby 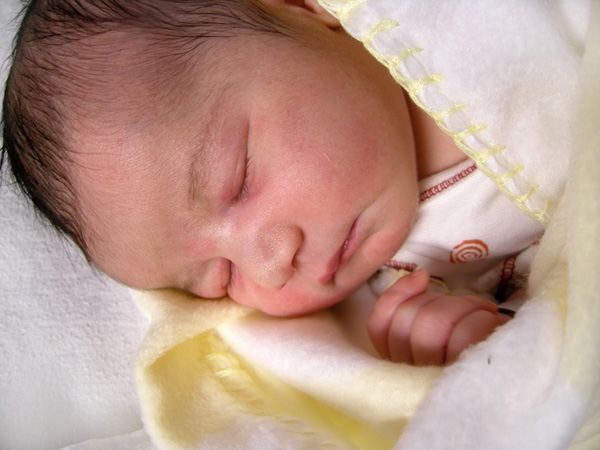 Dawn Dumont's bravely trekking across New Zealand with her baby, albeit her baby is a bit older than this one.

Three weeks in New Zealand with a seven months old baby – what could go wrong? Well, from a quick search on the Internet – everything. For one thing, they don’t carry our brand of baby formula, they have a giant hole in the ozone and their cable is satellite. Even one of those is enough to scare the mom-jeans off of me.

I don’t come from a long line of travellers. From what my mom tells me, from birth to ten years old we never left the homestead except for school or to go look at the beaver dam behind our house – and we still managed to break every limb and a few fingers.

Travelling seemed like a good idea seven months ago. I was pregnant and swore up and down that I would not change post-partum. I would still be the same daring, reckless adventurer that I’ve always been. Except, of course, that I have never been any of those things. My idea of risk-taking is using a different entrance to the midtown mall.

As the trip approached, I dealt with my growing anxiety by packing. I packed for every possible baby-related contingency for a week straight. Then I watched as my partner pared down my hard work to two suitcases and two carry-ons. He says I “got out of control.” I still say that we could have used our changing table – what if New Zealand has no flat surfaces?

We flew into Auckland on a 13 hours long flight. Until the hour before we left, I thought it was an eight hours’ flight. It wasn’t until my partner bragged to the cab driver “we’ll be flying for almost fourteen hours” that I realized. He says that he told me how long it was but I don’t remember that. (I suspect treachery.)

Our seats came with a baby bassinet. I can’t think of an easier way to travel with an infant, other than getting seats on a different plane from your baby. FYI: they don’t allow that – I asked.

We were lucky that most flights were on time. Babies do not like flight delays. And neither do mommies as it is my job to constantly gage the amount of food and diapers needed for each stretch of the journey. I was reading the Martian on this trip and certainly identified with the protagonist’s complex sustenance calculations after he was trapped on Mars. (At least he got to recycle his feces for food.) Baby’s dad was less nervous, believing that if we ever ran of out of baby food, we could use ice cream to fill in the “nutritional holes.” I’d like to fill in his nutritional holes.

We were using the stroller to schlep the baby around until we got to Wellington. We climbed a staircase as long as four pregnancies stacked on top of one another while carrying the stroller, the car seat, the baby and a deep resentment for Wellington city planners. After that day – also known as the day of a thousand leg cramps - we switched to a baby carrier – it’s awkward and makes me sweat like I’m eating soup in a sauna but the baby loves it.

After the first leg of our journey, the baby came down with a stomach bug. He threw up a few times, the most dramatic occurrence at three a.m., in bed, on his parents. Until that moment I didn’t realize how much being a parent is like being a roadie for a heavy metal band.

New Zealand baby food is pretty nuts. Pumpkin and lamb? Beef rice and kumala? Blueberries, kiwis and guava? Isn’t guava … bat crap? I’m sure its got a lot of protein but how is that even legal? Everywhere I look I see cherub faced fatties so I know kiwi babies are eating this stuff. The baby likes everything but I put my foot down at lamb. It seems cannibalistic for a baby to be eating another baby.

We’re halfway through the trip and the baby is thriving as he destroys hotel rooms across the country. He enjoys seeing new faces and sights every day which makes me think that maybe this wasn’t the worst idea ever. And there are even moments when I’m not a hyper-vigilant mom, usually after a glass of wine.