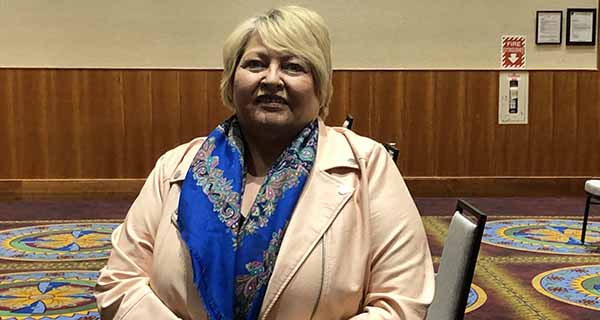 
On International Women’s Day, the tragic freezing death of Kimberly Squirrel and the atrocities of coerced sterilization were top of mind for First Nations leaders in Saskatchewan.

The disastrous effects of practices in the corrections and health care systems upon Indigenous women are examples of ongoing genocide, members of a women’s panel said March 8 at Whitecap Dakota First Nation.

“We as Indigenous women… It’s been generations, 152 years of abuse and victimization. You look at the incarceration rates, how they’re (increasing). It is simply wrong,” said FSIN Vice Chief Heather Bear.

Squirrel, 34, a mother of six, had been released from Pine Grove women’s jail near Prince Albert on Jan. 20, when overnight temperatures dropped to minus 30. Her body was discovered three days later in Saskatoon. Squirrel’s sister said she didn’t know Kimberly had been released and mourned the missed opportunity to take her in.

The provincial government is doing an internal review into release practices. Squirrel shouldn’t have been in jail in the first place, says Patti Tate, executive director of the Elizabeth Fry Society, a women’s prisoner advocacy group.

Too many Indigenous women are kept in jail before they are convicted of any crime, Tate said - 123 of the 190 women at Pine Grove are on remand.

Tait has worked with women who have spent a year in jail– sometimes because of COVID-19-related delays - waiting for trial, where they were found not guilty.

“There needs to be alternatives. It needs to start long before those women went to Pine Grove,” she said.

There should be more help for women with mental health issues, addictions and in need of housing, she said.

“We don’t want them to build a huge prison for remand situations in Saskatchewan. We want them to spend those millions of dollars… on resources in the Indigenous community.”

Over 90 per cent of women at Pine Grove are Indigenous, she said.
Saskatchewan has half to two-thirds more people on remand than any other province, she said.

“That’s genocide when we look at Kimberly Squirrel’s death,” Tait said.
“They’re our sisters and brothers and they need not be in those places where they are not able to be with their family.”
Bear agrees.

“Our wounded women (are in institutions) when they need more mental health services, more culture, more traditions, more of our values… because of our terrible history of that being taken away from us.

Lawyer Alisa Lombard, who represents more than 100 Indigenous women sterilized against their will in hospitals across Canada, said that since 2015 she has taken the matter to governments in Canada and numerous international bodies.

The United Nations Committee Against Torture determined in 2018 it was cruel and unusual treatment and directed Canada to “prevent, punish and repair” the damage from coerced sterilization, but nothing has happened, Lombard said.

Days after she spoke about sterilization in Switzerland, she received a call from a 29-year-old woman in a hospital bed, “asking how can she undo this?” Lombard said.
“These are not historic occurrences. They are happening right now.”

“As systemic problems they require immediate systemic action and systemic solutions,” she said.

Vice Chief Bear said there have been “many, many victims of that terrible genocide of our people. That’s still happening in this day and age and it should not be.”

The proposed class action has yet to be certified, partly because the pandemic has caused slow-downs in the courts and the defendant health system, Lombard said.