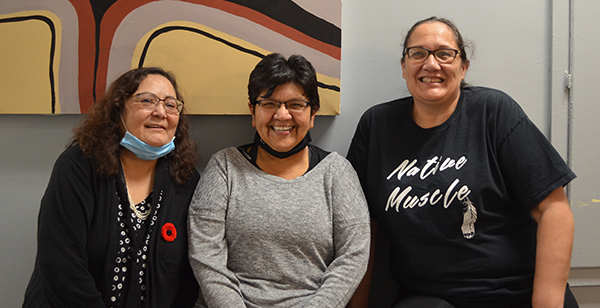 “Kohkoms” are coming to a screen near you! Playwright Curtis Peeteetuce, long known for writing about the Kohkoms of Kihwetinook for his Rez Christmas plays, has created a weekly YouTube feature with three real Kohkoms. The project was done thanks to a partnership with LSSAP (Library Services of Saskatchewan for Aboriginal Peoples.)

“LSSAP wanted to launch storytelling season earlier in November as opposed to February every year. So, I said we aren’t doing the Rez Christmas story, could we work with the content and material? So that’s where it started,” explained Peeteetuce. He describes the project as an exploration of grandmothers/kohkoms learning about acting, storytelling, and theatre. “What the community gets out of it is enjoying time with these ladies in ways we never have before. It’s been gold.”

“They’re having so much fun. Laughter is the number one theme out of all of this,” said Peeteetuce. “We’re hoping to get a couple of scenes of them reading and performing. It’s a big task to ask an elderly woman who’s not an actor to be one. They have lives, and they are busy in their other lives as women as mothers as grandmothers and friends. So, asking them to memorize a play is impossible.”

He describes the YouTube channel as “just capturing the reality of who these ladies are, rather than trying to make them look good on camera.”

“I’m learning so much more by just leaning back and listening to them go, as a writer, a director and an actor,” added Peeteetuce. In the 12 weeks working together, they are doing various scenes, activities, exercises and theatre games. “The best part is the conversation; I get to listen and learn.”

Currently filming is taking place in a private space three metres apart, with filmmaker Marcel Petit and Peeteetuce both masked, filming from a safe distance. They also do zoom calls.

Kohkom Gloria Myo says she loves it. “I’ve never had an experience like that, to be kind of taught how to breathe, before you’re getting a picture taken or something, or on stage, to breathe,” shared Myo, adding that she’s found it very helpful and uplifting. “Because the kohkoms always have, no matter whose kohkom you are, you always have a story and the stories I hear, we laugh. Like that’s all we do is laugh and laugh. Probably after it’s done, we’ll probably remain friends, the Kohkoms. We’ll probably keep in touch. I just wish it wasn’t ever over, that’s the only thing I wish.”

After the 12 weeks are up, they are hoping they will be able to go to various libraries across the province, doing Q and A’s.

“It breaks my heart that they have to feel isolation,” said Peeteetuce of the current pandemic, adding that when he asked them to define Kohkom, the answer he got was, “Love, kisses. That’s what a kohkom is. I just wanted to cry when I heard that.”

He added it was interesting to hear them destigmatize assumptions about what a kohkom is.

“We put an expectation on the grandmothers. If you are a new parent, the kohkom is supposed to keep the grandchildren. One of the ladies said yes, I kind of get tired of that. You’re supposed to be cultural, know the language, be an Elder. Those kinds of pressures.”

Peeteetuce says these are insights he doesn’t necessarily get as an actor so it’s fascinating to him.

“I hope they’re going to have the opportunity to meet people, I want people to see them online and then get excited about meeting them in person.”