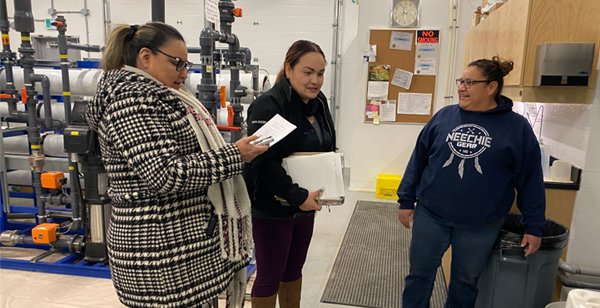 Regina – Students at the First Nations University of Canada have led the way in a major investigation into First Nations water issues, as part of a national collaboration coordinated by the Institute for Investigative Journalism at Concordia University.

Darla Ponace was in the first semester of the year-long research project, ‘Clean Water, Broken Promises,’ which began in Fall 2019. “Reconciliation should have started with clean water for all First Nations communities,” says Ponace, an INCA student from Zagime Anishinabek First Nation. “There needs to be a national standard for drinking water for all people across Canada.”

The investigative class involved a field trip to First Nations communities in the Qu’Appelle Valley area, to meet with leaders, water operators and community members impacted by decades of underfunded drinking water infrastructure and operations support.

They found water operators and Councils have done remarkable work in their quest to deliver clean water, including advancing new technologies and training programs. However, colonial relationships and the federal government’s neglect of Treaty obligations makes progress exceedingly difficult.

In total, three FNUniv undergraduate and graduate classes took part in the research over two semesters. Students learned how to conduct data journalism, file freedom of information requests, prepare questions for government officials and reach out to community members.

“I gained experience in investigative journalism through research,” says Jaida Beaudin-Herney, a Mi’kmaq and Cree woman from Membertou First Nations who grew up on the prairies.

Ten universities and colleges joined the IIJ project partnership. Beaudin-Herney and Ponace received funding to travel to Montreal, where students from across the country met at the IIJ office to design and plan a nation-wide investigation.

Beaudin-Herney was awarded an IIJ reporting fellowship that supported her to continue working on this and another IIJ investigation, Project Pandemic, through summer 2020.

“The project built capacity for Indigenous reporting through hands-on coursework, and cracked the case on systemic colonialist policies,” says Beaudin-Herney.

Participating students learned from senior Indigenous journalists and journalism educators from across Canada.

The project was advised nationally by Duncan McCue, an Anishinaabe journalist who teaches at the UBC Graduate School of Journalism and Ryerson University, and was recognized by the Canadian Ethnic Media Association with an Innovation Award for developing curriculum on Indigenous issues; Karyn Pugliese, a Ryerson University journalism professor, former executive director of news and current affairs at APTN, and recent Nieman Fellow at Harvard University; Martha Troian, an award-winning independent Indigenous investigative journalist; and Jamuna Galay-Tamang, a journalist specializing in Indigenous approaches to justice in Canada. It was coordinated by investigative journalist and IIJ Director Patti Sonntag of Concordia University.

The StarPhoenix, Global News Regina and Saskatoon, and APTN News began releasing a series of Saskatchewan-based stories that had their genesis in the student research, on February 22. Global National, Canada’s National Observer, the Tyee and Le Devoir are also part of the project.

The student’s work can be viewed at www.brokenpromises.urjschool.ca, a multimedia website created in a joint INCA-School of Journalism course in Winter 2020.