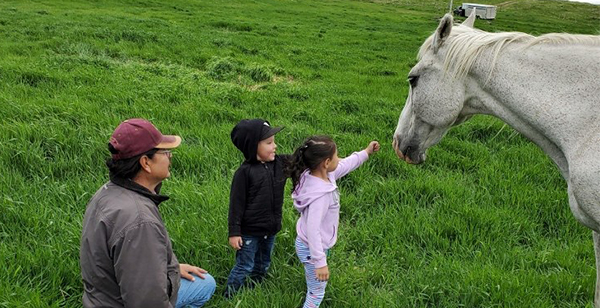 Children great Rocky, a legendary thoroughbred that is known all across Indian country. Now Rocky helps connect with female inmates at a healing lodge. Photo supplied

Dale Mosquito has been around horses for as long as he can remember. His father was a horseman, as was his grandfather.

The animals were part of his life long before the Four Seasons Horse Teaching program at the federal Okimaw Ohci healing lodge was established at Nekaneet First Nation in the early 2000s.

The program, for which Mosquito is an instructor, teaches women serving federal sentences about horses and how to care for them while helping the women heal too.

“A lot of the things that the horses can teach us can overlap and help others, which was our thinking at the time, which is how the program got started,” Mosquito recalled of the program’s origins. “What we like to view it as is part of a healing plan.”

The women learn how to approach horses, equip them with saddles and the basics of equine hygiene and anatomy. It starts with a talking circle where the women are introduced to each other.

The programs take place several times per year and last about a month. The morning portion of the course is spent in the classroom and the afternoons are outside with the horses.

“Through some of the teachings in the classroom, we look at things in a historical perspective too,” Mosquito added. “Because when we look back, we can see what causes why a person would want to stray away from leading, I guess, a good life.”

Horses are animals so they won’t judge people, Mosquito said, but they’re responsive to a person’s body language and overall demeanour. The horses help the participants relax and kind of let their own identities shine through, he said.

The program addresses aspects of life such as the physical, social, mental. emotional and the spiritual.

“When we do ceremony, that gives us a connection to the land and gives us an identity, who we are as people,” Mosquito said.

Mosquito doesn’t work alone in the program. He has a team with him, which includes an elder from the community and a facilitator to take care of the paperwork for the social rehabilitation program, as it is classified by Corrections Services Canada.

Mosquito’s daughter, Shaya Stanley, has also helped with the program in some years, as she has been around since the start, when she was 14.

Some of the horses are kept on the land at the lodge and some are brought from off-site.

The program has evolved over the years but the one constant has been Rocky, Mosquito’s old horse that is known across Indian Country. Rocky is a thoroughbred and is the tallest horse in the program.

“That’s his number one, that’s his old reliable,” Stanley said, adding that Rocky will celebrate his 28th birthday in May.

Stanley said Rocky is the horse Mosquito took to horse dance ceremonies as part of the program, before COVID-19 slowed things down and limited escorted temporary absences for the women at the lodge.

“When we were able to do that, it was a nice break from being in the institution,” she said.

“It was a nice little getaway and that kind of lifted everybody’s spirits to come out and be away from there, even for a day.”