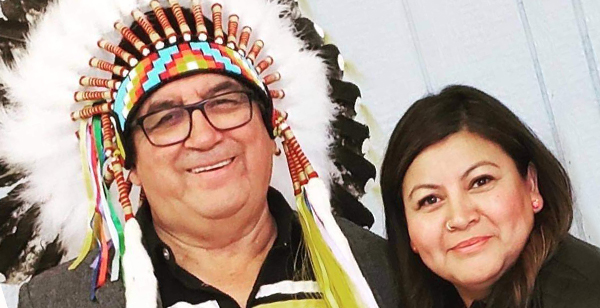 Byron Bitternose received a vote of confidence from the band members of the George Gordon First Nation. Chief Bitternose was voted into the role for a full term in September after about two years in an acting role. The election was originally scheduled for April but when the COVID-19 pandemic was declared, the election was postponed.

“We have two elders groups -- one at the reserve here and one in Regina -- so we met with them and asked them if at all it would be possible to have an election on April 9 and they advised us against it,” Bitternose said.

Upon the advice from the elders, Bitternose said the GGFN contacted Indigenous Services Canada who granted the council a six-month extension on their term.

Then on August 9, the election was held with polling stations set up in Regina, Saskatoon, Calgary, and Edmonton for the band’s 3,800 members. The work didn’t stop though.

“We’re on lockdown right now -- not necessarily lockdown but we don’t want non-band members coming onto the reserve,” Bitternose said. Due to the rising numbers of COVID-19 cases in Saskatchewan, the lockdown will extend until at least December and then it will be re-assessed.

Only essential workers, like teachers and the workers who provide supplies to the store, are being allowed on to the reserve for the time being because of the pandemic.

Bitternose said the long-term goal is to have community safety workers working on the First Nations to monitor the five entrances in and out of the community. People are being trained right now as there are only 10 workers for the five locations.

“If it gets any worse, we’re just gonna shut the reserve down and say ‘stay home,’” Bitternose said. “It’s very scary. Not everybody is taking it as seriously as I’d like to see it.”

The chief described the job as “busy, busy, busy” as the band council works on economic development in addition to navigating the complexities of the pandemic.

Bitternose said the band has purchased 579 acres of land in Regina which hopes to turn into an urban reserve. Another 150 acres of land has been purchased near the K+S Mine in the Bethune area.

Bitternose said the band has had discussions with the surrounding rural municipality and the corporate brass at the mine to further develop a business relationship.

The band also has a solar agreement with the Star Blanket First Nation to set up solar panels in Weyburn, beginning in 2021. The 30 megawatts of solar power generated would be sold back to SaskPower, he added.

Bitternose is also concerned about the struggles some of the band members have with drugs and alcohol on the reserve.

“We’re like any other community, I guess; we’re struggling with the drugs,” he said. “We’ve been meeting and working on that, trying to come to grips with some of our problems here on the reserve.”

Council met over the weekend to discuss possible solutions and one idea is a possible treatment facility on reserve. Bitternose mentioned family addiction treatment through Ranch Ehrlo, a Regina-based non-profit, though only discussions have been had so far.

“Nothing signed but we’ve met a couple of times and we’re hoping they can help us build something on the reserve and treat some of our people,” Bitternose added.