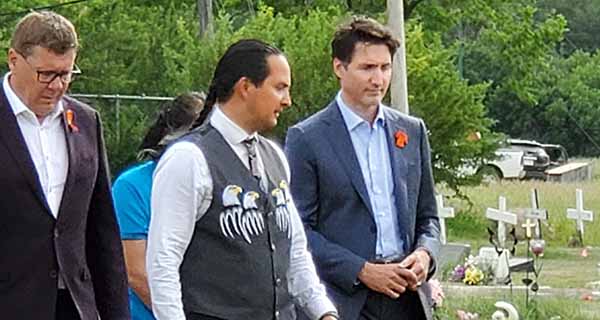 The legislation, which Trudeau called a historic step toward reconciliation, will ensure jurisdiction and control over child and family services to be returned to Cowessess so they can make their own decisions about what is best for their children, family, and community. The agreement marks the first time in 70 years that the First Nation will have control over their own child and family services.

As part of the Coordination Agreement, the federal government will invest $38.7 million over the next two years for the implement station of the First Nation's child and family services system.

“(The Coordination Agreement) will ensure we move forward. Kids will get the support they need, the protection they need, driven by their own communities, in their own languages, in their cultures. That no kids will finally be removed from the communities they are part of,” said Trudeau during the signing.

“That is the goal. That is what we're signing, the very first agreement all across the country, to start today in Cowessess,” he said.

The provincial government will continue to provide protection services for Cowessess First Nation children off reserve during the transition time to full implementation by Cowessess. Premier Moe said despite the recent trying days, the Coordination Agreement is cause for some optimism.

The announcement comes mere weeks after the revelation that ground searches at a former residential school at Cowessess found 751 unmarked graves, most of which are believed to be those of children.

“As a country, as a government, we've been reminded over the past few weeks that the path to reconciliation means recognizing past wrongs and working to do better. It is shameful that here in Cowessess, and across the country, children die because of the policy of residential school,” said Trudeau.

In Saskatchewan, 80 percent of children in foster care are Indigenous, according a 2018 report.

“Every day we will roll up our sleeves to make sure that every child, when we call them home, they know where home is. That is Cowessess First Nation,” said Chief Delorme. “And that they will dance, they will get their education, and they will walk with their chin up and be a proud Cowessess citizen.”