Agency working with patient being treated with traditional medicine

When Richard Richardson found out he had stage four terminal lung cancer in February, the oncologist at the Saskatoon Cancer Centre told him it was inoperable, irreversible and that he was going to die. He recommended chemotherapy but the mayor of Green Lake, Saskatchewan, politely refused.

The oncologist was upset, Richardson said.

Richardson uses traditional Métis medicines and practices to treat his cancer with the help of his wife, Rose Richardson, who is a Métis Elder and medicine woman from northern Saskatchewan. Richardson spends two to three hours every day making teas from plants that he has picked in the proper manner. He rejected chemo and radiation because of the negative side effects, which would have diminished his quality of life.

Richardson’s decision did not sit well with some of the doctors at the Centre. Richardson turned down radiation treatment and stated again that he was using traditional medicines at a meeting in April. When he asked to still be monitored, the oncologist rejected Richardson’s request, saying follow-up care was only for patients who wanted treatment.

In a letter of complaint to the Saskatchewan Cancer Agency, Richardson stated the refusal to monitor him was both a violation of the United Nations Declaration on the Rights of Indigenous Peoples and his constitutional rights. The letter made its way to Corey Miller who is vice president of Care Services for the SCA. Miller said that, while physicians can have their opinions, they cannot deny follow-up care if a patient asks for it.

“Just because people are not receiving our treatments but are choosing alternative doesn’t mean they don’t have the right to continue to be followed up under our care as they need it,” he said.

Miller said the physician team at the centre has been reminded of this fact and that Richardson’s complaint points to a lack of clinical knowledge about Indigenous medicines. 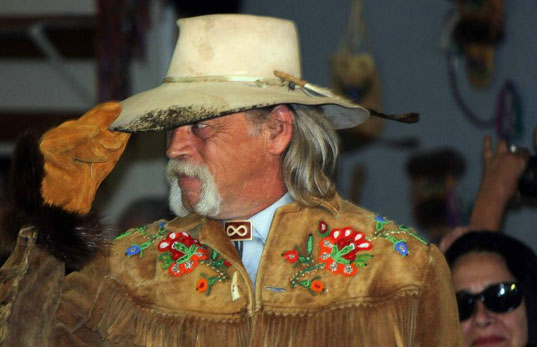 Richard Richardson was diagnosed with terminal lung cancer earlier this year and is treating his illness with traditional medicines. The Saskatchewan Cancer Agency is working with Richardson to learn more about integrating knowledge of Indigenous medicines with modern medical care. Photo courtesy of Richard Richardson.

That knowledge is something Richardson wants to share with the medical community.

“I think this is a good opportunity for learning by modern medical science, that there are traditional ways that are beneficial for a number of things, including cancer. We should be learning together and walking together to achieve that goal,” he said.

“It’s going to be a journey to bring our two systems of treating diseases together,” said Miller, who explained that the challenge for the SCA is receiving specifics from patients about traditional medicines. Some Indigenous patients don’t want to share because of protocols or because of a lack of trust with the healthcare system.

“We want to rebuild that trust so that people know that we’re using that data and information for the good reasons and not the bad reasons possibly of the past,” he said.

Richardson’s follow-up care with SCA began shortly after his complaint, which is testimony, he said, to the agency’s sincere effort to work with him.

As for his health, since the time he would have begun chemotherapy five months ago, Richardson said he hasn’t lost his colour, his breath and is still able to perform his duties as mayor. He also said the latest test he received showed his tumour has shrunk significantly.