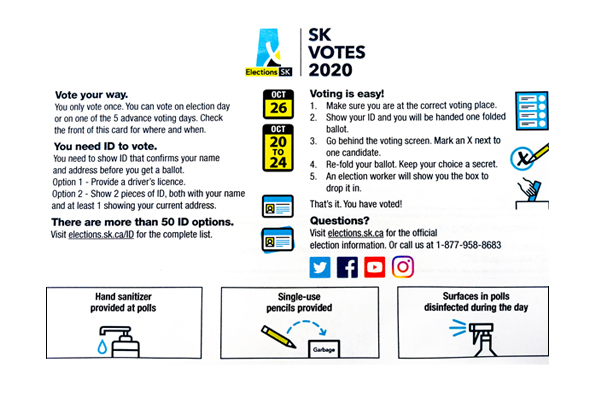 The deadline for a special voting measure to ensure that members of the Peter Ballantyne Cree Nation (PBCN) could cast a ballot in Saskatchewan’s general election on Monday, October 26, was less than 24 hours away when Chief Peter Beatty agreed to the suggestion last week.

Band leadership had implemented travel restrictions across the seven communities making up the PBCN after an outbreak of COVID-19 in one of the communities earlier in the month. Elections Saskatchewan wanted to know the condition of the band membership leading up to the election and whether or not a vote could safely be cast in person.

The outbreak was contained to one community, Southend, but PBCN leadership had implemented precautions throughout its communities.

“We locked down the communities. Travel was restricted to certain days and residents only, no intercommunity travel and so on,” Beatty said.

He spoke with Dr. Michael Boda, electoral officer for Saskatchewan on Monday, October 19, who said there was a special procedure used in emergencies, in which a ballot could be delivered, then picked up later. The caveat is that registration for the delivery would have to be made over the phone and meet the Tuesday, October 20 deadline. About 400 people registered for the delivery by the deadline, Beatty said.

Concern still remained for band members who had difficulty registering over the phone, so PBCN leadership consulted with Saskatchewan’s chief medical health officer and the band’s own health administration and decided to return to pre-lockdown plans for COVID-19 guidelines in the voting stations, so people could vote in person.

“We’re going to have polling stations in the communities on Monday, except for Southend,” Beatty said. Those who weren’t able to register for the delivered ballot and hope to cast their ballot have the option to do so at an advance poll in La Ronge, he added.

The chief medical health officer’s reasoning was that since the outbreak was limited to one community, the restrictions could be eased in the other communities without compromising safety. The PBCN is spread across three treaty jurisdictions in Saskatchewan to the Manitoba border and the majority of its more than 11,000 members live across the area.

“We are working to get a ballot to them at their front door,” Dr. Michael Boda said on Wednesday. “It is extraordinary and it has never happened in the province before, so that’s why it’s called extraordinary.”

“When there was a lockdown at Peter Ballantyne, we had to make use of messengers,” Boda said. “(Ballots are) dropped off and then an election official will come back closer to October 26th and pick up those ballots. So that’s the extraordinary process.”

Boda said there are alternatives when there isn’t a lockdown, which is what led to the re-activation of the voting stations on the majority of the PBCN communities. At the polling locations, people are asked to wear masks and masks will be provided, if desired. Hand sanitizers will be available and polls will be distanced.