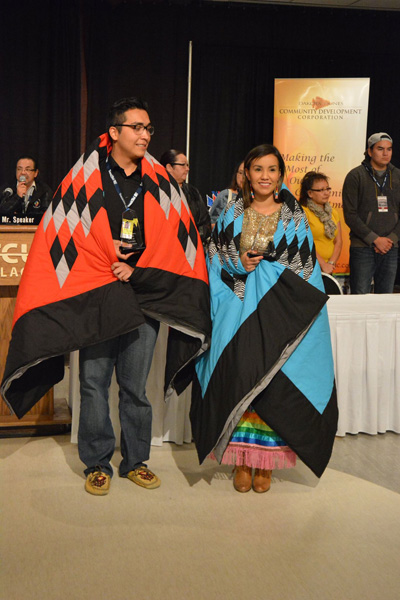 The role model issue is always one of our favourites here at Eagle Feather News. We get to celebrate the folks and organizations in our community that are doing extra ordinary things that make Saskatchewan a better place to be.

We want to give a big shout out to all the women that organized the Sisters in Spirit walks across the Nation (for sure some guys helped out, but really, it seems most of the time it is the ladies leading on this front). The solemn walks top honour missing and murdered Indigenous women are always followed by community building meals and visits with speeches from dignitaries and family members. People donate money or food and their time and the community unites around a cause...at least for a day.

The walk in Saskatoon was led by a group of women drummers. One of those drummers was our old pal Lindsay Knight. We have been fans and followers of Lindsay since way back when we first saw her perform hip hop for some grade school students. It has been a blast to watch her mature into a fine community leader, mother and partner and academic...and she still puts out the hip hop, recently releasing her album Good Kill.

Now, I missed the hip hop era....growing up in the 80’s we had Trooper, BTO, the Stones and of all things Flock of Seagulls. But Lindsay’s music and words cross all age boundaries, even impressing me and those much older than me. As testament to that fact, while we were at the Gordon Tootoosis honouring, Lindsay walked by our table. I pointed her out to my mom and said...hey, that young lady there is Lindsay Knight. “Oh yah,” she says. “Eekwol.” Just like that. My mom is 82 years old. Way to make impressions, Lindsay. And happy birthday, mom.

Leave it to Harper and his gang of shape shifters to try and make the election about Muslim people and pot. What better way to avoid having to talk about Indigenous issues than to muddy the water with a debate over niqabs at citizenship ceremonies (an issue that at present impacts all of 2 women). Cue the outrage. Now Facebook is flooded with fearful and hateful posts of Muslims taking over the west and forcing their way of life on us and eventually likely blowing us all up. The reality couldn’t be further from their spin, but the spin has begun. When you are losing an election campaign badly, cater to the ignorant and they thrive on fear.

Then lying Stephen, in order to bring down front runner Justin Trudeau and his pragmatic policy on marijuana control, outright lied and said that smoking pot is “infinitely worse” than smoking cigarettes. Mr. Harper must not have read the backgrounder that shows that 37,000 deaths last year in Canada were attributed to smoking cigarettes where NONE were directly attributed to smoking marijuana. If he is lying so blatantly about this issue, it makes you wonder what else he is lying about. Also shows his character.

Other kinds of politics

And also due for mentions are the recently elected FSIN Youth delegates Andre Chavez Bear and Cheyenne Fineday. The FSIN has a long tradition of engaging youth through their Assembly and they have a way of picking future leaders. But actually these youth are leading right now.  Next thing you know they will be running in the real FSIN election.

For more on the federal election, stay tuned to our Elections page. As of press time, the only political party to release its entire Aboriginal platform was the Liberals. So, they are ahead in our books. The Conservatives don’t have a platform on those issues...but when the NDP does release one, we will have that and much more on our website in the Election section. Come read it. And vote.

Click here for more from John and our columnists.