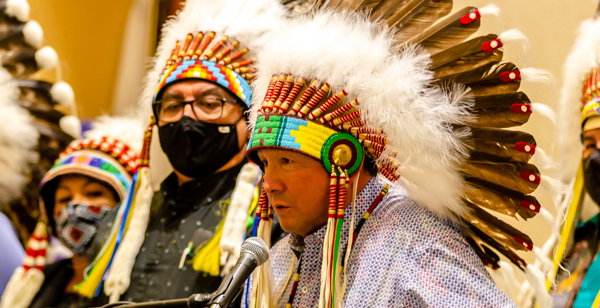 Chief Reginald Bellerose of the Muskowekwan First Nation announced his candidacy for Chief of the Assembly of First Nations with the FSIN backing him. Photo supplied

Chief Reginald Bellerose is ready to take his vision and leadership to the national level.

The long time Chief of Muskowekwan First Nation recently announced his candidacy for National Chief of the Assembly of First Nations (AFN), which will hold its election July 7.

“I've dedicated my life to working for our people, to help our people try to advance important issues,” Bellerose said in an interview.

The AFN will see a new face at the helm, as Perry Bellegarde announced in December he would not run for re-election.

Bellerose is one of seven candidates for National Chief, and the only one from Saskatchewan. The others are RoseAnn Archibald (Ontario), Jodi Calahoo-Stonehouse (Alberta), Lee Crowchild (Alberta), Alvin Fiddler (Ontario), Kevin T. Hart (Manitoba), and Cathy Martin (Quebec).

Bellerose said the leader of the AFN needs to have a strong voice, and grassroots experience at the First Nations level.

“At the FSIN, with our legislative assembly and our internal system, it is good training grounds for this position, training that no post-secondary institution can give you. We have 74 First Nations that meet, and institutions like SIGA, SIIT, First Nations University all came from Chiefs around Saskatchewan sitting around a table and strategizing on how to make improvements,” he said.

“When it comes to experience, navigating the day to day experiences that a Chief in Canada goes through, I would say that's what jumps out at me. If you're successful, you're going to last at it. If you're not, people are going to vote for another option. I've been Chief for sixteen and a half years.”

Bellerose has outlined three key areas in his campaign for National Chief: rights and jurisdiction, economic sovereignty, and health and wellness.

Rights and jurisdiction is critical because historically, nations came together and were able to make agreements with the Crown because of inherent rights they had to land, and this same principle is relevant to all Indigenous people today, he said.

“We have a common thread throughout the country: this is the land our Creator put us on, we've been making use of it for thousands of years. As modern times came along, our rights have been eroded… people are now having to pay for medications, or being asked to prepay for dental care, to pay for rights enshrined through treaty,” he said.

Bellerose said economic sovereignty is not about economic development, but about doing business through traditional economic opportunities like harvesting and living off the land.

“No government can tell us that as First Nations, we cannot live that way of life,” he said.

He also wants sharper attention to the opioid epidemic and crystal meth additions that plague youth.

He said the main issue at the AFN right now is that money allocated to supporting First Nations is being tied up in bureaucracy. He wants to make sure funds are actually reaching the First Nations they are intended for.

“He has been a dedicated and influential leader in Saskatchewan for nearly two decades,” it read.

“Chief Bellerose is dedicated to the success of First Nations across all Treaty Territories and beyond. We fully support his bid and believe he would be a great fit for AFN National Chief.”