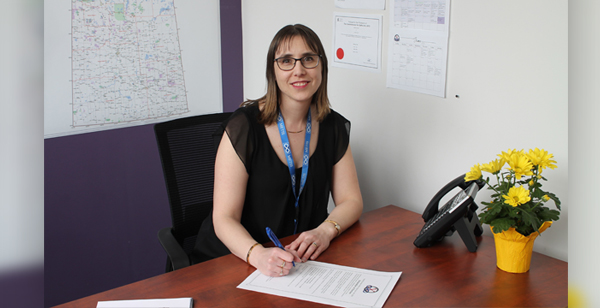 Chief Elections Officer Gwen LaFond signing and issuing the Declaration of the Election on April 24. Photo by Andrew Allsopp

The month-long campaign for the 2021 Métis Nation-Saskatchewan general election has kicked off, as candidate nominations officially opened on April 24.

With new procedures in place concerning both safety and membership, election officials are working to ensure voters are prepared before showing up to the polls on May 29.

“We are trying to create as much awareness as possible, so people aren't turned away,” said Gwen LaFond, Chief Electoral Officer.

Running an election during a pandemic means there will be some rules to follow on voting day. Voters will need to wear masks and sanitize their hands before filling out a short voter registration form. The voter registration form, required by the Elections Act, includes name, address, date of birth, and Métis citizenship number. Voters need a valid Métis citizenship card or letter from the registrar's office proving a citizenship application has been accepted, as well as a valid health card.

Those who meet the identification requirements, will receive a ballot.

The entire process should take about five minutes per voter, said LaFond, with a little extra time expected to sanitize between voters.

“I don't anticipate a lower voter turnout than usual. I think people (of the Métis Nation) will do what is necessary to go out and vote,” she said.

Barriers, socially distanced polls, masks, and constant disinfecting will be in place to ensure aelection officials and voters are not exposed to risk.

Members can vote in advance of the May 29 election day at 12 regional offices throughout the province from May 14 to May 21.

Election legitimacy has been a recurring issue with MN-S elections, but LaFond assures voters there will be no reason to distrust the voting process or results.

“We have all the checks in place. Candidates are allowed to have representatives at the polls to observe the election processes. We have qualified elections people hired throughout the province, we did our best to hire people with election experience at all levels,” said LaFond.

Nominated for Treasurer are Louis Gardiner and Dennis Langan.

Candidates may be nominated for only one position and must file nominations papers with LaFond or one of the 12 regional returning officers before 2:00 pm on April 29. Final candidates will be posted on April 30.

Unofficial results of the election will be updated in a live-stream on mnselection.ca. Official verification of the results takes place five days after the election.