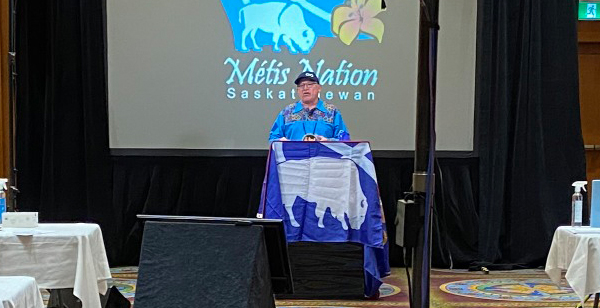 The Métis Nation-Saskatchewan has never had more than 3,000 registered voters in past elections, but there are now 15,000 and counting, says President Glenn McCallum.

“I always feel our measuring stick for what we've done is our registry in regards to the success we've had, and people being excited and coming in to sign up, and that are there for our Métis people. So will we be judged by what we do,” he said in an interview.

McCallum says he will run for re-election at the May 29 leadership election, the date for which was set during the Métis Nation Legislative Assembly (MNLA), held virtually on February 20 and 21.

McCallum, who plans to begin campaigning a month prior to the election, said history will speak for itself come election day.

“We will be judged by what we've done. That's all I can put forward,” he said.

The February MNLA was the first since November 2019, as COVID-19 health orders restricting public gatherings caused the MN-S to cancel all assemblies in 2020.

“It was beautiful to see again,” said McCallum of the MNLA.

Two amendments to the Saskatchewan Métis Elections Act 2007 and the MN-S Citizenship Act 1999 will effect the vote: All voters will now be required to present Proof of Citizenship  in order to cast a ballot or run for office. Voters not yet in the MN-S citizenship registry will have to provide proof that their application has been submitted prior to March 30, 2021.

“Things happen where it doesn't look right. We've been judged on our elections many times in the past. No one can do that now because we have a system. Our citizens will have their cards to be able to vote. It'll be the way it should've been a long time ago,” said McCallum.

Questions of fraud arose following the 2017 election after two presidential candidates indicated that they were not allowed to see the voter list.

At the MNLA, the MN-S also issued their response to Canada's Bill C-15, which introduced the adoption of the United Nations Declaration of Rights of Indigenous People (UNDRIP). The UNDRIP protects collective rights of Indigenous people that may not be addressed in other human rights charters.

McCallum said he is happy about the adoption of UNDRIP, but Canada must continue meaningful consultation with Métis to ensure their voices are heard.

“UNDRIP addresses that and compliments that.”