The slogan he used during his campaign was, “Show them your heart, before you ask for their hand”.

Delorme won the election by a landslide and is now the new Chief of Cowessess.

With his outgoing personality and willingness to serve people, Delorme is this open-minded person who has always been open to listening and spent much of his time with elders who had instilled in him a, “listening clause”.

In a candid conversation a couple days after his win, it is easy to see why he won the hearts of the people in his community. 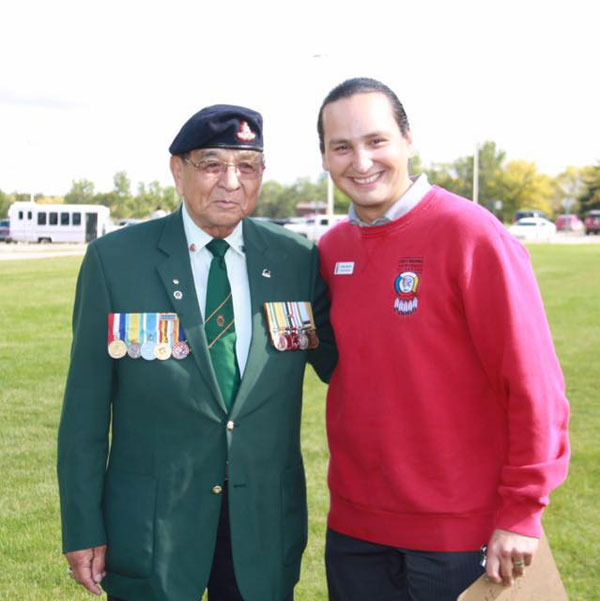 EFN: How does it feel to be the new chief?

Delorme: By Lunch hour today, I knew I was going to love my new job

Last night after the count, we all came up to my family’s house and we had many people come to sit around the fire and someone pulled out an eagle feather and people started sharing. It was a lifting moment with people smiling and laughing.

Then this morning I went down to the school and I said good morning to every student that got off the bus and ninety per cent of them didn’t even know who I was and they couldn’t figure out why I was standing there shaking their hand.

By lunchtime we met with the council and we had an opening prayer at our band office and we invited all the administration staff to join us.

The feeling in the administration office from people going from tenths to realizing there’s going to be plans set in place.

This evening, I went to bingo and I just got home from bingo, just the laughter at the bingo hall, it just felt different.

It’s still sinking in, I giggle every time someone calls me chief because I’m not used to it yet I’m still Cadmus, but the role I will take seriously.

EFN: Did you win at bingo?

Delorme: I did and when I yelled bingo, everyone started laughing. It was a prize bingo for our adult education class, fundraising for their graduation and I won a bunch of scratch and wins, so I’ll be scratching late into the night.

EFN: What made you decide to run for chief? How or when did that idea come into place?

Then I just asked what their thought was, and from there the momentum built. I always wanted to serve my nation as a leader.

When I was finishing my masters I knew and sitting in class, listening to policy and governance, I’d just get excited knowing I can bring this home to my nation and help us rise to levels we know were capable of.

About a year ago, I just sensed that it was time.

EFN: What do you want to accomplish in your term?

Delorme: There’s internal, our house of law, band office, our governance, we need to set it up and prepare for people to want to run to us and invest with us.

We also have to make the Chief and Council an invisible hand where we don’t micro-manage but we govern our nation and with the people your nation is only as strong as the home fires: Self-pride, self-confidence, education, recreation, and many many moving parts that we have to try and improve and lift one day at a time.

Externally, we’re treaty 4, we’re stewards of the land, we have a fiduciary relationships with the government, we just ultimately want to lift ourselves to be a self-sustaining nation but at the same time working with many different stakeholders; if it’s government, if it’s business, if it’s corporate, just getting the house ready to be able to go with the progress of the world.

EFN: What challenges do you expect in your first year in office?

Delorme: People know Cadmus as someone who knows my incentive to the nation is to serve and volunteer.

I think the challenge is when people have to talk serious, not negative but bigger towards certain things, the challenge I’m going to have, is keeping that conversation progressive, keeping it positive and keeping our hearts and minds clear because that’s how good decisions are made.

Another challenge I’m going to have, I believe is, I have the strength of governance and strength to keep conversations going but I have never been a councillor or chief before so what I think may work and actually implementing could be like day and night. I learn quickly in life. I don’t have an ego, I don’t have anything to prove to myself, I just want to make sure we have good decision making skills at everything that we address, it’s not being worried, it’s more about being confident in myself knowing that due process was followed.

Delorme: In order to be strong, we have to work on ourselves and it ripples effects to our nations, you know sometimes people think that your chief and council or your nation have to do this and that but you know peoples incentive to their nation is very important. Your incentive has to be to give back and lift. You know I have done that my whole life and I believe that is the reason my people voted me in. One of the elders said I have been campaigning my whole life.