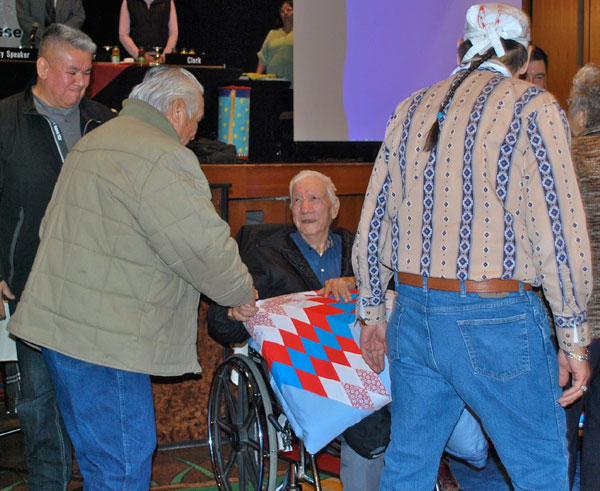 Elder Fred Paskemin (center) is honoured for his years of service.

The FSIN had to lay off most of its staff in early 2014 due to millions of dollars in cuts from the Harper government.

However, Cameron, who was elected chief last October, says things appear to be turning a corner with a new Liberal government in Ottawa.

The new head of the FSIN is also fresh off his first legislative assembly as leader, which took place February 16-18 on Whitecap Dakota First Nation.

“It’s been a long time coming, especially with the change with the federal government,” he says. “We now have a Liberal majority who have all these very good commitments with respect and recognition of our inherent and treaty rights, on really emphasizing on building on a nation-to-nation government basis. Now we just wrapped up our two-and-a-half-day assembly, which was really inherent and treaty rights focused. Many good discussions and directions coming from our chiefs, coucillors, Senate, elders on what it is when it comes to a treaty-based budget. And, really, emphasize and advocate that treaty relationship must be with the Crown.”

At the assembly, elected officials voted on and approved a five-year budget worth about $2.5 million per year.

The FSIN is still running a deficit but Cameron says he doesn’t see this as a long-term problem. 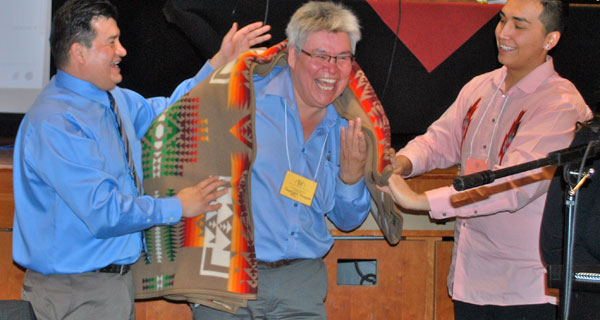 Moreover, he says the main thing is governments need to live up to their treaty obligations in terms of providing adequate funding to First Nations people in such areas as education, housing and health care.

“The federal government is in deficit, the provincial government is in deficit and so are we. So that says that obviously there’s not enough funding for housing, education, health and all those other related items and the fastest growing demographic our First Nations people. Something’s going to give. The funding really has to reflect our growing demands, it has to reflect our growing population.”

There was also significant discussion at the assembly on the recent Canadian Human Rights Tribunal ruling on how the federal government meets its obligations in terms of on-reserve child welfare services.

The CHRT has yet to put forward what specific actions Ottawa should take to remedy this discrimination.

Sebastian Grammond, the senior counsel for the First Nations Child and Family Caring Society, spoke to the FSIN assembly about the ruling via Skype.

He says whatever recommendations the CHRT decides on, it is important that they meet the test of substantive equality.

In other words, the recommendations must take into account the unique historical challenges Indigenous people living in Canada face.

“For 20 to 30 years, we have been developing in Canada another conception of equality called substantive equality,” Grammond says. “What does this mean? It means that equality does not just require equal treatment. It means also that governmental measures must take into account the special needs, the special circumstances of certain particular groups.”

On the floor of the assembly, close to $3,000 was also raised as part of an effort to send 10-year-old Marcus Haywayhe and his family to Disneyland.

It is estimated the trip to Disneyland will cost about $15,000.

The next assembly is slated to take place in May and will likely be held in North Battleford.