Athabasca Constituents head to the polls next month 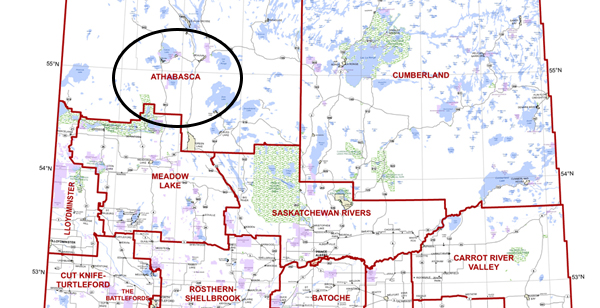 Premier Scott Moe has set February 15 as the date for the Athabasca byelection.
The seat was previously held by long-time NDP MLA Buckley Belanger. In August he resigned to run in the federal election, but fell short. He has publicly stated that he has no plans to return to provincial politics. He represented the Athabasca riding consecutively for 26 years.

Saskatchewan Party Candidate Jim Lemaigre announced his intent to run in the by-election.

Lemaigre will be going up against a veteran NDP politician.
In December, current La Loche Mayor and former MP Georgina Jolibois announced she will represent the Saskatchewan NDP in the Athabasca by-election.

The Athabasca riding covers the northwestern part of the province and includes communities such as Ile a la Crosse, Buffalo Narrows and La Loche.
According to Elections Saskatchewan, during last year’s provincial election Belanger captured 1,730 votes while Kelly Kwan of the SaskParty received 1,112. The Saskatchewan Green Party candidate Leroy Laliberte received 204 votes.

Nominations for this by-election close on Jan. 29th.
Election Saskatchewan is encouraging voters to start their Vote By Mail application as soon as possible. More information on the application can be found online at www.elections.sk.ca.

According to Elections Saskatchewan, as of January 18, 2022, there are 9,293 registered voters in Athabasca. Any eligible voter who is not already on this list and misses this deadline can still register in person when they vote in-person.

On Feb 17, the mail ballots will be counted and added to the final tally on Feb. 28.
Elections Saskatchewan says precautions will be in place to make it safe for both the voters and election workers.

Election workers are needed for this event. Workers can earn up to $230 for working voting day, and even more for working the five days of advance voting. Election workers must be a Saskatchewan resident for the last six months, and at least 16 years of age. You can apply online at www.elections.sk.ca/takepart or by calling 1-833-419-0141.