Prisoner rights champion joins U of S College of Law 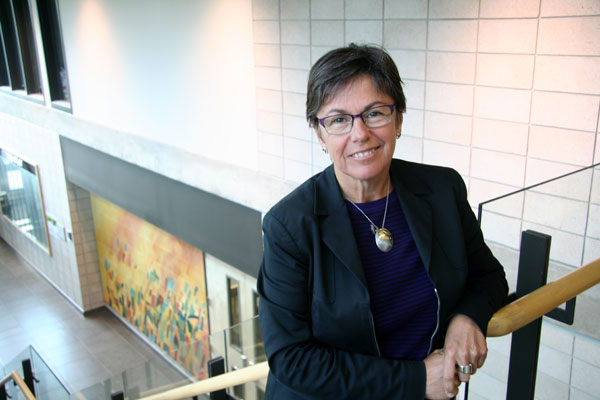 Kim Pate, pictured at the U of S College of Law, holds the Ariel F. Sallows Chair in Human Rights.

Kim Pate has made a career of helping marginalized, criminalized and incarcerated women and girls know and fight for their rights.

The long-timer executive director of the Canadian Association of Elizabeth Fry Societies is a lawyer by education and an advocate by experience, and she has brought that experience to the University of Saskatchewan.

For this academic year Pate holds the Ariel F. Sallows Chair in Human Rights at the College of Law.

It’s a position she was keen to take.

“In part because I have worked for years, since I worked with men, with people who are imprisoned at the Regional Psychiatric Centre,” Pate said, from her office at the university, decorated with paintings made for her by a number of prisoners.

“The students here are very interested in doing prison law, so it seemed like a good fit.”

The timing is right for a number of reasons.

In May, Pate is planning to hold a conference in Saskatoon that will bring together local and international speakers, as well as women who have been in custody themselves.

“We’ll be focusing on the criminalization of indigenous women in particular, especially those with mental health issues,” she said.

Pate said she sees a massive over representation of aboriginal women in prison.

“The correction investigator reported in several recent report, about the over incarceration of indigenous women and the fact that they’ve increased at eight times the rate of any other prisoner in the past decade.”

The situation of increased incarceration is tied to cutbacks in areas that provide supports to women who need assistance, she said, adding that those who are already disadvantaged have lived with more oppression, have less access to health and social services, and more likely to be criminalized.

“So that is a big focus of the work I do all the time, but especially with the opportunity to be here in Saskatoon,” Pate said.

“One of the things I am focusing on is the comparison between the treatment  Aboriginal Peoples, the over classification, the greater likelihood of having inadequate support, social services, housing, everything, and then the link to the characterization of them as dangerous and violent, particularly women.”

Pate has had years of experience dealing with women who others have deemed to be a violent risk. In the early years of her role as executive director of the Canadian Association of Elizabeth Fry Societies, she brought her children with her everywhere – including into prisons.

She spoke about a time when she took her son, who was a few months old at the time, into a correctional facility for women. At the end of the day the head of security came in and said there was an incident and the women were screaming and yelling, and he was going to send in the emergency response team.

Pate said she asked what the women were upset about; as she had just been with them a couple of hours earlier and her two month old had been babysat by the same women as she was talking about some of their issues. They had made the child a vest and moccasins.

She said she offered to see what the concerns were, before he sent in the security team.

“And he said, ‘Why don’t you take the baby? They really like the baby,’” Pate said.

“And I thought, okay, the gig is up if you think a baby … could calm down a situation where you might otherwise bring in a team and escalate the situation, really spoke volumes about what they understood.”

It was the situations in jails and prisons that pushed Pate in the direction of prison advocacy.

“I could not believe that … unlawful behavior by actors of the state, police, corrections, was allowed to happen. Not only allowed, but was actually in some cases almost promoted, and nobody knew about it,” she said.

“At first I think it was anger and a desire to make sure people knew what was happening, and part of it is I’ve been really lucky to work with some incredibly courageous, resilient, amazing young men and women … who have done amazing things.”

Her belief that it is the people who she has worked with, and on behalf of, that has allowed her to have the opportunities she has, makes receiving awards difficult for Pate.

“That’s the biggest challenge for me. I have difficulty ever accepting them as individual achievements, because they aren’t.”

Pate was named to the Order of Canada in June.

“One of the women who I have known for a long time said, ‘oh, are they making it the disorder of Canada now?’”

The energy and excitement of the next generation of lawyers and advocates are what inspires Pate as she takes the U of S chair.

“It’s less about what I hope to do. I have been so inspired by some of the students,” she said.

“I get energized by the incredible energy and creativity of the next generation, so that’s what I think is really exciting.”

The addition of new blood and fresh ideas is why Pate plans to be finished with the executive director role before she celebrates her 25 year with Elizabeth Fry Societies (this gives the organization two years to find a replacement).