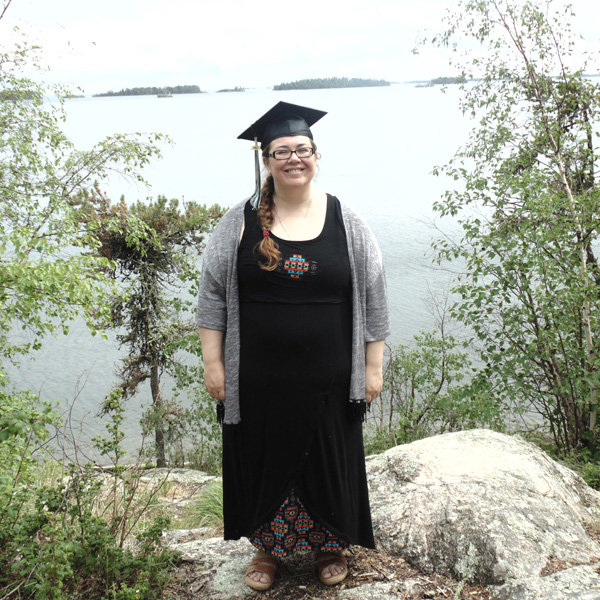 “I’ve been here since 2008,” says instructor Anne Cook, “and this is the largest graduating class I’ve seen.”

Sixteen of the 18 students who began the program in September completed it. Both Cook and fellow instructor Lyle Riley give some credit to a bus service and access to a daycare at nearby Senator Myles Venne School for the high success rate.

“Because we are in partnership with the (Lac La Ronge Indian) Band, students can take advantage of extra resources,” says Cook.

The program also endeavours to help students make connections with the world outside of school, collaborating with Elders for a Cultural Day, and with Indian Child and Family Services and its parenting course. As well, following a violent incident in the community in February, the whole school focused on learning about murdered and missing Indigenous women and got involved in a beading project that raised money for the Piwapin Women’s Centre.

“It’s all about community,” says Cook.  “When they see the connections, that’s what they remember.”

In addition to receiving certificates of completion and gifts, four students were presented with SIIT Achievement Awards.

Alysha Roberts received the Academic Award and the Most Improved Award went to Sabrina Halkett.  Stacey Bear was given the Best Attendance Award and Deanna Howe was honoured with the Leadership Award. 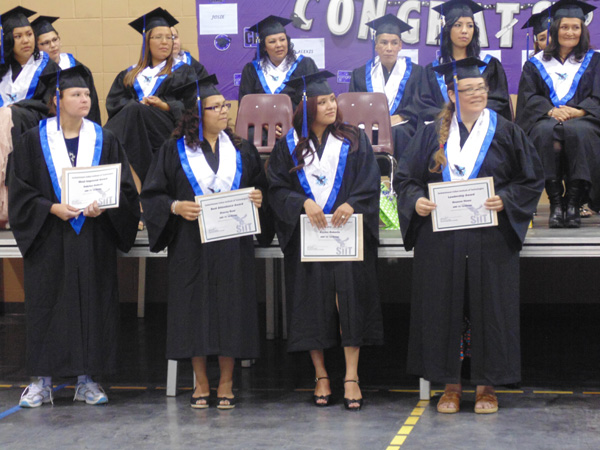 “I was very surprised,” says Howe, who returned to school for the first time since completing her Grade 10 at Northlands College in 2001. She felt it would be easier now that her four children, ranging in age from 13 to 22, are older. She also had another reason.

“My teenagers are struggling with school; I wanted to be a role-model for them,” she adds.

Still, she says, keeping herself motivated was one of the biggest challenges. She admits that there were times when her alarm went off in the morning, that she didn’t want to get up.

In order to get her work done without distractions, she would often stay at school after classes.

In his address, Elder John R. Halkett honoured the graduates for their accomplishments and congratulated them on overcoming obstacles. He noted that past leaders such as Senator Myles Venne had a commitment to education and he encouraged the students to carry on that vision.

Howe intends to do just that.  She has been accepted into the Northern Professional Access College and hopes to major in Native Studies.