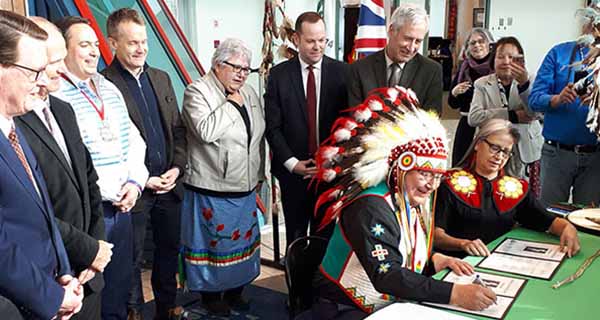 The Star Blanket Cree Nation has entered into a new education agreement with the Prairie Valley School Division which band leadership says gives it greater autonomy and authority over the delivery of education to the community’s children.

The agreement clarifies which services are available to designated students in the school system so that those students can get the education they need and, if applicable, their special needs met, according to Chief Michael Starr.

“Sometimes, over the years, they [school facilitators] would only put them in maybe marginal programs just to get them by,” Starr said on Wednesday.

“This agreement strengthens, makes sure that they communicate with us more, along with the parents, so that we give them the proper skills, proper education, to help them learn better.”

The agreement, which was signed over an online conference call on Tuesday, also establishes more frequent lines of communication between the school division and Star Blanket stakeholders, Starr added.

With previous agreements, the deal would be signed and then that was the end of communication until maybe another deal was signed two to three years later, according to Starr, who held the education portfolio as a band councilor.

“It formalizes that process for us where we have greater control, greater input, greater involvement into the education and the attainment of all of our students,” said Sarah Longman, director of education for File Hills Qu’Appelle Tribal Council, which includes Star Blanket.

Some students from Star Blanket and File Hills are bussed into Fort Qu’Appelle or Balcarres for school. Starr wants students’ delivery of education in those two places to be synchronized with one another eventually.

The chief said he also hopes that more traditional knowledge and Cree culture will be included in the delivery of education models currently available. Starr acknowledges there is a challenge for the division to implement such measures, due to the multiple Indigenous languages being spoken in the area alongside Cree. Fifteen First Nations are located within the division boundaries.

“If they have that opportunity and they find a way to do that more effectively, that’s what we’ll work together on to provide that to our young people,” Starr said.

The Prairie Valley School Division is located in southeast Saskatchewan on Treaty 4 territory.