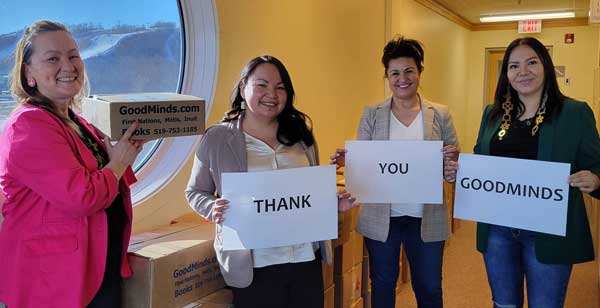 After getting the idea to install mini libraries in each community, FHQTC received a donation of $55,000 worth of books from GoodMinds. Photo courtesy of FHQ Education website

It has been said many times in many ways that books can be a portal to another world for those who take the time to read. Now the communities that are part of File Hills Qu’Appelle Tribal Council (FHQTC) are able to go on their own adventures thanks to a $55,000 from GoodMinds.

The idea first came about during a regular Monday meeting where the team was discussing what do to for Literacy Week. “I thought it would be neat if we could put a little library in every community for everyone to access,” said Alana Starr FHQTC’s literacy and home-based learning consultant.

“I thought wouldn’t it be great to partner up with GoodMinds and have those interviews on our website to inspire some future authors and have them put a face to a name,” said Yuzicappi.

After some discussion, Yuzicappi called Achilles Gentle, president of GoodMinds, to ask for permission to post the interviews they were doing on their website and told him about their idea for small libraries in each community.

Gentle thought this was a great idea and said he wanted to supply the books through their Support Indigenous Libraries Today Fund. “We were surprised by the support we got from GoodMinds. I don’t think it would have been such a huge success without his support,” said Yuzicappi.

When it came time to divvy up the books, GoodMinds was courteous enough to have labeled each of the boxes by community so this made distribution easier.

“We weren’t expecting the amount of books that showed up,” said Starr. “We were grateful because they were filled with such quality literature, Indigenous authors, and (books for all) age levels.”

“These boxes came filled with everything for every type of reader in mind. The love and appreciation that came from communities after we went out and installed them ... it has been well received,” continued Starr.

Having small libraries in each community now gives more people access to literature they may have not had before.

“We know the more books in a home the more likely it is that children are going to love and enjoy reading. We had people in our communities who love to read but don’t have access,” said Starr. “This helps break down those barriers to accessing literature.” This is why it made more sense to bring the material to the people instead of making them use something like Amazon or have to venture into Regina and go to Chapters.

“Many of our communities are remote and they will not have access to this material so it made sense to bring the material to them to support our communities,” said Yuzicappi.

Starr is happy with the way everything fell into place. “From seeing the project from start to finish, it warms my heart. It’s extremely rewarding to have done something like this. I’m proud of our team,” said Starr.

After watching how everything came together, Starr hopes that they can maybe build another small library in each community in the future.

“I would love to see the communities make replicas of what is there and place more in and around their communities. That would be fantastic,” said Starr.

Yuzicappi hopes other communities take a page from their book when it comes to literature.

“I hope the idea grows with other communities,” said Yuzicappi. “It’s not a huge cost to have this type of structure put in place. We hope we inspire individuals to utilize libraries when it’s safe and to improve their literacy skills.”