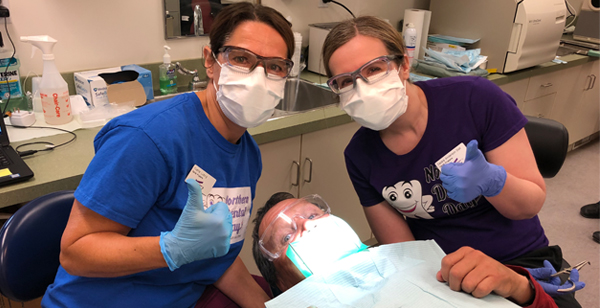 Ten years after a Saskatchewan training program for on-reserve dental therapists closed, plans are in the works for a new two-year program aimed primarily at First Nations applicants.

The partners hope to deliver the proposal to ISC by March of 2022. The earliest the program could start would be in 2023, said Doug Brothwell, Dean of the College of Dentistry at the University of Saskatchewan.

The last dental therapy program in Canada closed in Prince Albert in 2011. Since then, the number of dental therapists - who often work in rural, northern, and Indigenous communities - has dropped precipitously.

“Since the closure of the school of dental therapy, oral health services in Indigenous communities have suffered,” said Colleen Durocher, manager of community service unit for NITHA.

“First Nations people are the most profoundly affected by the shrinking numbers of trained dental therapists and face the greatest oral health inequities.”

The dental therapy workforce is aging: fewer than five per cent of dental therapists under age 35, so the need to train new professionals in this field has become more urgent, Durocher said.

The partners are committed to prioritizing Indigenous students at every stage, from enrollment through to graduation.

“We’ll be limiting our intake of students to First Nations students only for the first year, or at least that’s what the proposal is now,” said Brothwell. “And the priority stream will always be for Indigenous students.”

Dental therapists play a similar role in oral health as Nurse Practitioners do in medicine - they are trained to do some routine procedures that are usually performed only by dentists, such as fillings and extractions, along with preventative care.

The current plan is to deliver a two-year, six-semester training program that runs through the summers, on three campuses - in Regina, Saskatoon and Prince Albert - so students can stay closer to home and hopefully return to their home communities upon graduation.

“We’ve gotten considerable amounts of interest,” said Brothwell. “We could almost fill the first year class already with the interest we’ve had. We’ve also had many communities phone in and ask what they can do to get a student from their community into the program.”

Durocher says NITHA, SaskPolytech and the U of S form the perfect team to bring back dental therapy training.

“We at NITHA know what’s required to enable Indigenous students to excel in education programs,” she said. “The College of Denstistry knows what it takes to graduate competent clinicians. And then the partnership with SaskPoly opens up the option of training dental therapists in Regina, which will benefit the southern Saskatchewan First Nations.”