Cannabis and driving: Clearing the air on roadside testing 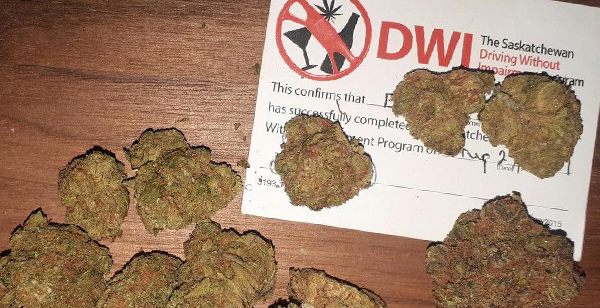 October will be four years since cannabis was legalized, but motorists may still be hazy on the driving-after-use rules.

The RCMP and SGI have teamed up to clear the air.

“We’re not trying to tell people not to use cannabis, we’re actually trying to help people understand what the rules are so they can stay out of trouble,” said Tyler McMurchy, manager of media relations for SGI.

In 2021, police across the province issued 523 marijuana-related driver license suspensions, while in 2019 there were only 76 suspensions in that category.

McMurchy attributes the rise in cases to two factors: increased availability of cannabis and an expansion in testing activity.

According to SGI, 39 communities in Saskatchewan have provincially licensed dispensaries.
First Nations with stores on their lands include Pheasant Rump, Zagime, Fishing Lake, Peepeekisis, Red Pheasant, Saulteaux and Thunderchild, which may or may not be included in the provincial numbers.

Testing for cannabis can be done with a sample of blood urine or saliva.

“THC has a shorter lifespan in saliva than it does in urine or blood,” RCMP Staff Sgt. Patrick Barbar said in a news release. “For most people, THC will no longer be present in oral fluid after 12 to 24 hours.”

Drivers who test positive for marijuana impairment can expect a minimum three-day suspension of their driver’s license and mandatory vehicle impoundment.

The testing will not be limited to cities and will be carried out throughout rural communities and the north.

People in rural and northern communities face higher costs, since tow rates are nearly $3 per kilometer.

“Enforcement is as strong as it has ever been in Saskatchewan,” said McMurchy.
Impaired driving from all restricted substances is the number one killer on provincial highways, however a spike in impaired charges doesn’t necessarily mean an increase in fatalities and injuries. Overall, these numbers have gone down in recent years.

Not everyone is satisfied with the RCMP’s new testing procedures.

“I went to pick up my daughter from a night out, and at around 3 a.m. I was pulled over and tested. I failed the swab test but passed the roadside sobriety test,” said motorist Ben Thompson.

“The officer said he could smell the THC,” said Thompson. “I went to court and my lawyer had the charge withdrawn because the cop hadn't been properly trained in administration of the test. It cost me $2,000 in lawyer fees.”

Kyla Lee, a Vancouver criminal lawyer, is concerned about false positives and the amount of time a person is actually impaired after consuming marijuana.

Lee worries that some of these testing methods may be unfair to heavy or medicinal users. Saliva testing is subject to interference with other compounds that can produce false results, she said.

“The manufacturer never tested every single compound that you can put in your mouth, nor could they,” said Lee.

Lee’s advice regarding cannabis use while driving: “Don’t.”