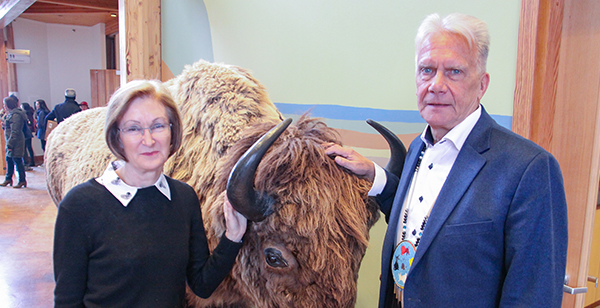 Ina Lou and Wayne Brownlee at an event at Wanuskewin. Their foundation donated $10 million to the Saskatoon Public School Foundation to help increase literacy. Photo by John Lagimodiere

The Saskatoon Public School Foundation has launched a $20 million campaign to support literacy, with $10 million donated by the Wayne Brownlee family to start them off.

“Basically we have a problem in the inner city,” where most of the children are Indigenous or new Canadians, and generally low-income, marginalized in society, said Brownlee, a former Chief Financial Officer with PotashCorp.

“A lot of the kids grow up in homes that aren’t conducive to at-home education and so they’re behind the eight ball when they start and never get enough attention to make a difference, so their ability to capture Grade 3 literacy by the time they hit Grade 3 is greatly reduced.”

In the inner-city schools about 60 per cent don’t achieve this goal, which then reflects the graduation rates, he said.

In Texas, Grade 3 literacy rates are used to plan jail and detention cells, because job prospects are diminished and gang membership goes up, along with susceptibility to drugs and alcohol, he said.

“In Saskatchewan, 60 per cent of inmates don’t have a Grade 8 education,” he said.

“This is 500 kids a year who are probably going to drop out before they graduate, but we found with some programming, we can bring this number up to close to 100 per cent graduation rate. These kids just need help to get there.”

The five-year program’s goal is to raise the $20 million to fund Pre-Kindergarten, all day Kindergarten, early learning tutoring and the summer read program.

“We think that will have remarkable success. Over five years, that’s 2,500 kids,” said Brownlee, adding he hopes to create community awareness and longer-term funding resolutions. “Saskatchewan has one of the lowest literacy rates in Canada. If we fix Saskatoon we can move Saskatchewan up substantially as a province. That’s how big the population is and what a difference we can make.”

Successful trials of the program at Mayfair School have moved the rate of Grade 3 reading attainment to 90 per cent from 25 per cent.

“We think we can turn the trajectory of these kids’ lives around. The return per dollar invested is seven dollars, because with education they are less likely to be wards of the justice system or social welfare because they’re being marginalized,” noted Brownlee. “It’s not just a moral investment, it’s an economic investment and health care investment.

Brownlee says he believes in taking societal ownership of the situation.

“They’re all our kids and we need to fix it. It’s just the right thing to do. We can make a difference, and with the money I’ve earned over a long period of time, if I can re-put it into the community and make an investment of it, I support causes like this because it’s investing in people.”

Zeba Ahmad, Executive Director of the SPSD Foundation, praised the Brownlee donation and said that the Foundation is the charitable arm supporting the work of the division; all fundraising and programming is channeled through the foundation, a unique relationship.

“A lot of these kids aren’t achieving grade 3 level reading and the board started to ask why, it was no fault of a student or teacher, it’s challenges that are legacy: Residential school legacy, generations that have not been able to graduate, this is a generational community issue that we need to talk about without laying blame anywhere,” said Ahmad. “But if we don’t invest in this and our children, we will see this for generations to come and as a board it’s very important that we get this conversation out there.”

She asks why Saskatchewan can’t aspire to be best in the country rather than the bottom.

“This is not acceptable, we’re not a third world country,” Ahmad said, citing the example of South Korea, which fundamentally changed its system for great results.

“There’s no better way to support our youngest people and impact future generations, to see these kids succeed,” than to support the Foundation, she said.

“I attended an inner-city community school growing up, so I have firsthand experience at exactly what a lot of the kids that we will be supporting are going through or deal with,” he said.

“It’s an honour to be a part of this and I’m looking forward to reaching our goal with the support of the community.”