A child’s jawbone along with 2,000 potential unmarked gravesites have been discovered at a former Indian Residential School 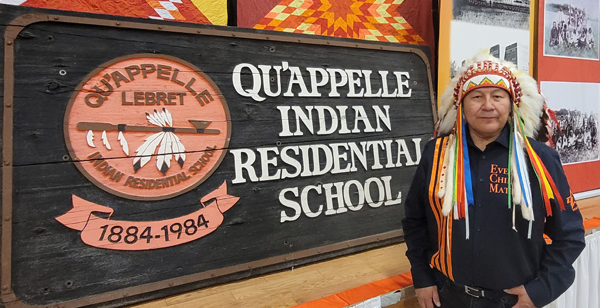 Chief Michael Starr, standing by an old Qu'Appelle Indian Residential School sign after the announcement of Phase one of the ground search. Photo by Kerry Benjoe

Secret rooms and underground tunnels are slowly being uncovered by those searching the grounds of the Indian Residential School located in the Village of Lebret.

On Thursday, the Star Blanket Cree Nation released its initial findings, which includes more than 2,000 points of interest as well as the discovery of a 125-year-old jawbone belonging to an unidentified child between the ages of four and six years old.

“The truth of what had actually happened to our people, our ancestors, this is evidence now,” said Chief Michael Starr. “As leaders of our nations we have to use this information now and say, ‘This is proof.’ Because a lot of times nobody believed there were actually remains on this site or any other site.”

Many simply refer to it as Lebret.

“I’m tired,” said Chief Starr after the announcement. “I feel better today, now that we accomplished what we set out to do, which was to announce the remains that we did find, so that portion was very emotional and hard on our council and our IRS team.”

He said the discovery was made shortly after Orange Shirt Day activities on Oct. 2 by a member of the on-site security team. However, it was decided to wait until the age of the bone was verified before releasing the information to the public.

During the announcement, a small, bright-blue box adorned with gifts of beaded jewelry and tobacco sat on the table in front of Chief Starr. It was later revealed the box contained the child’s jawbone.

Experts estimate the death to have occurred around 1898. 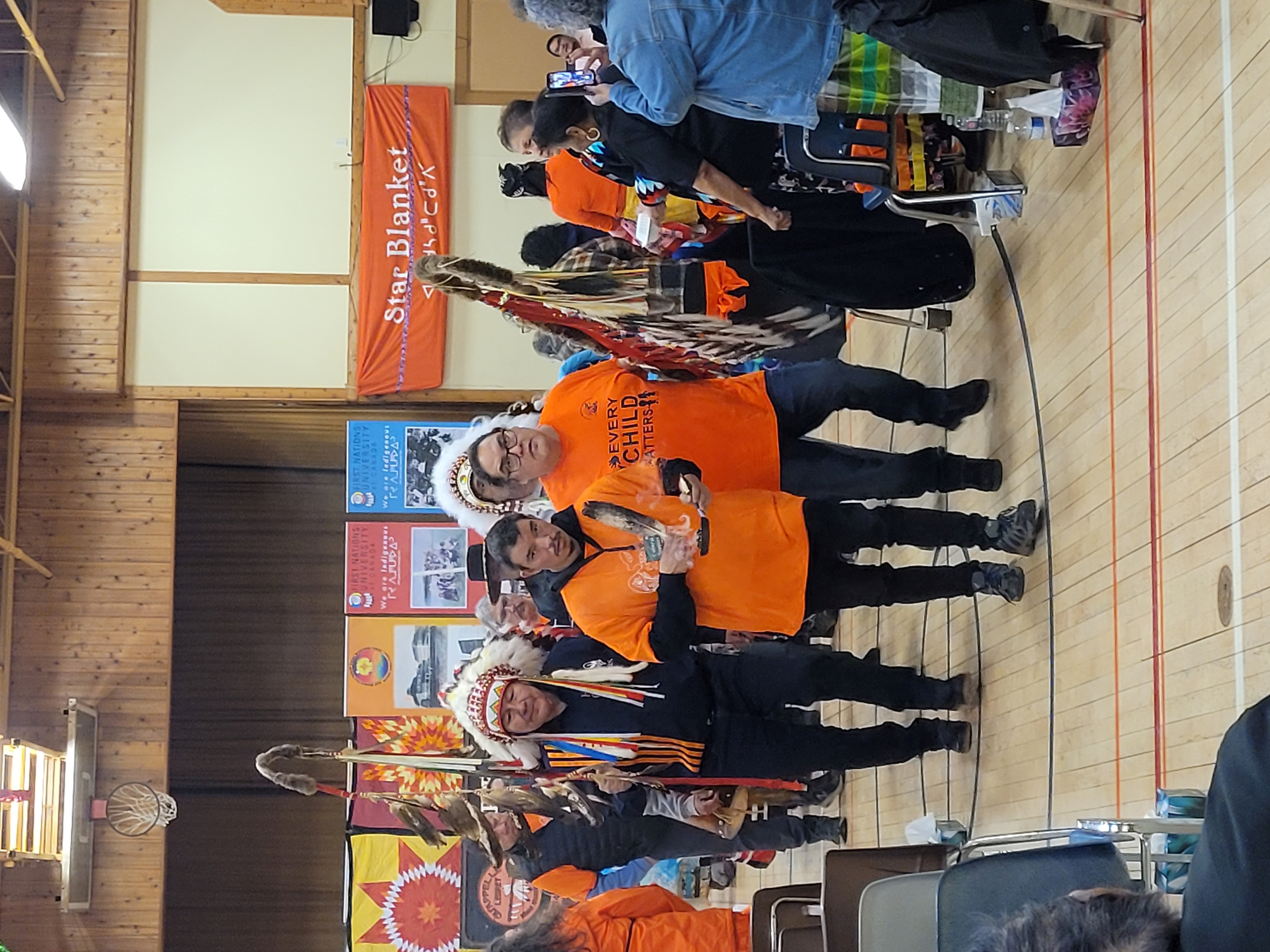 The kindergarten-aged child would have attended the Qu’Appelle Indian Industrial School, which burnt down in 1904. A second school was built in1906, but it too, burnt down in 1932. The third school, built of brick, opened in 1936 and remained in place until it was demolished in 2000.

The ground search began more than a year ago and although the SBCN IRS ground search team worked with technology experts, it was Mother Nature that yielded the biggest piece of evidence.

Poitras said they met with other ground search teams including the one at Cowessess where they were told to pay attention to the gophers.

As it turned out the tip paid off.

The jawbone was located on the surface near a gopher hole at one of the areas of interest.

“We needed a little helping hand from the gophers to make the discovery,” said Poitras. “It’s peculiar and kind of amazing it happened like that, but I’m glad it did.”

He is not only the project manager, he's also a former student of the school he's now in charge of searching.

“When I look at all the areas of interest and I think back, we used to walk all over those areas play sports and do extra-curricular activities...where there might be potential grave sites,” he said. “It brings a different realization. It’s a bigger impact when you realize there’s that kind of history here.” 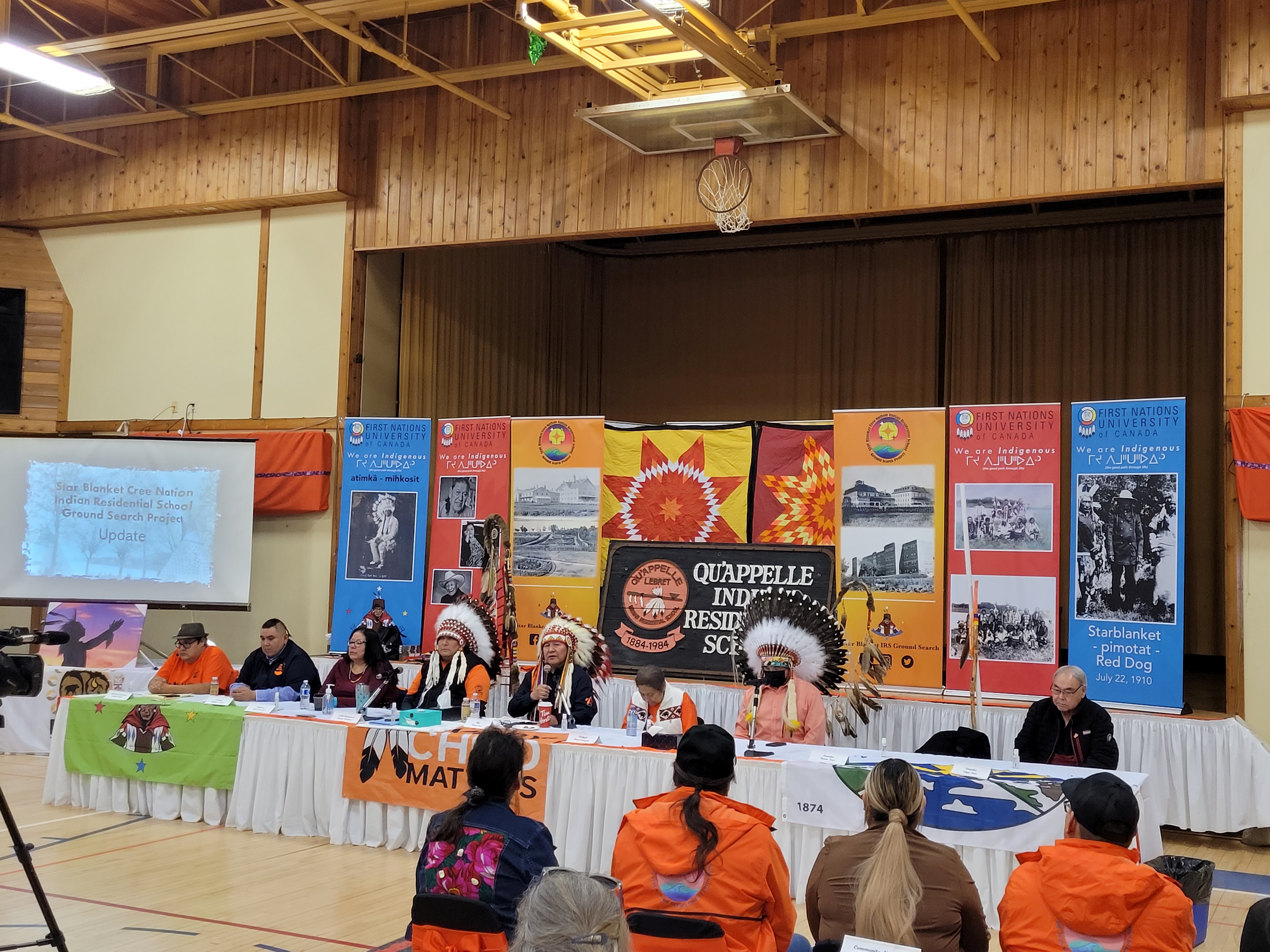 The press conference announcing the discover of human remains and more than 2,000 areas of interest at the former Indian Residential School in Lebret. Photo by Kerry Benjoe

Poitras said the ground penetrating radar has located at least two rooms and an underground tunnel, which will be explored later.

Although phase one is complete, the work is far from over.

Poitras said each area of interest needs to be closely examined, to determine which ones are actual grave sites.

“It will be a process of elimination,” he said.

There are also other places off site that need to be searched, which means reaching out to landowners in the area to get their permission. Poitras believes there are unmarked graves in the area, but an exactly where and how many will take years to determine.

Poitras and Starr want to federal government to commit to funding the ongoing searches.

Marc Miller the federal minister of Indigenous Services Canada, who joined the news conference via Zoom, acknowledged that this discovery is the first verified finding of bones.

He said Canada will continue to support efforts to bring the children home.

More on this story the February edition of Eagle Feather News.