This article appears as part of a series from the Business Development Bank of Canada (BDC) in honour of the 2015 Young Entrepreneur Award, where Canadian business owners aged 18 to 35 compete for a grand prize of $100,000 and a second prize of $25,000 in consulting services from BDC. 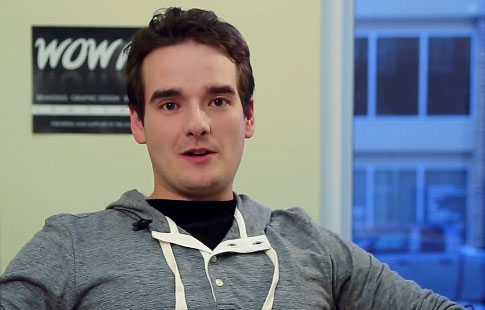 When you’re managing a young business, your decisions can make or break your company. To help other young business owners, we asked five entrepreneurs to talk about important errors they made; how they recovered; and the lessons they learned.


“We kept going until we were in the six figures in receivables.”

When I started my printing and marketing company six years ago, my mind was focused on getting sales and making a name for ourselves. So we would do whatever we could to get the job first and worry about payments after. We would send a bill and hope that eventually our clients’ accounts payable would notice it and pay us. We were very naïve.

We were doing all the work, paying our employees and for all of our materials and then we wouldn’t see money for 60, 120 or sometimes 180 days.

We kept going like this until we were well into the six figures in receivables. It was all completed work, invoiced and overdue. This was putting a lot of stress on the business.

Eventually, we hired someone to track down money and get us paid. We’ve also put in place structured procedures for payments and introduced a standard payment form. We now take half our fee upfront automatically and give a 2% discount for clients who pay the whole amount up-front. And our salespeople don’t get their commission on the job until we are paid in full.

Things are way better. We get paid on time. My worries about clients going elsewhere weren’t justified. They are more than willing to pay.

When you’re an entrepreneur, mistakes are going to happen. But if you correct them and don’t make the same mistake twice, you’ll be alright.

Ever since I started my business six years ago, I knew I had to put clear processes in place. But I got so busy putting out fires all day that I never did it. When your revenues grow by 40% a year, the idea of documenting processes on top of that becomes overwhelming.

Our product – reusable, anti-bacterial beeswax-coated fabric food wrap – is hand-crafted, so every time we hire someone we have to train them on how to manufacture it. The learning curve is long and employee performance evaluation is difficult.

When I found out that my operations manager was going on maternity leave, it really hit me. It was all in my head. And now it was also in her head and she was leaving. I had to start again from scratch training someone else.

This is when I began documenting processes and procedures in a manual. So now every time I do something that I would just intuitively do, after I finish the job, I write down what I've done.

Every time I do the job again, I go back to my document, review what I wrote and adjust. I am encouraging my team to contribute. It’s a collaborative effort. We are translating our way of doing things into teachable processes. This will help us be more productive and make new employees training easier.

I wish I had started documenting procedures in a manual from day one. Without clear processes, you’ll never be able to grow because you’ll always be busy working in your business.

“It was as though I had sunglasses on.”

I opened my information and technology services business for the hotel industry 10 years ago.

By last summer, we hadn’t had tight control over our finances for about a year. Finding the right accountant proved to be a major challenge.

I saw the sales coming in, I saw the cheques that I was signing, but I didn’t have a complete financial picture of my firm.

When our financial statements were updated at the end of the fiscal year, I got a huge surprise, with expenses that had gone unnoticed. Yes, sales had gone up, but expenses had increased at a much faster rate.

We set up solid accounting practices and managed to hire the right person to handle our finances. We now do our financial statements once a month.

Going somewhat over our budget on sales of $4 million isn’t the end of the world. While it wasn’t a bad year, it wasn’t as good a year as we could have had either.

For me, though, it was a big mistake. Not having an overview of the business’s financial indicators on a regular basis was as though I had sunglasses on. I thought I was seeing things clearly, when in fact I wasn’t at all.

You can’t manage what you don’t measure. The importance of having accurate data on your company cannot be over looked, and you need to surround yourself with qualified, trustworthy people.

“I should have been patient instead of going full into it.”

We suffered a major production setback at the outset, when we opened our cheese plant in 2011. I had a recipe to make my cheese that had been tried and tested many times over the years. It’s just that I had never made more than 10 kilograms of cheese at a time.

When I opened the plant, I tried to make as much cheese as possible at once, to build inventory. I started making 150 kilograms a day, five days a week.

I lot of it turned bad, about 3,000 kg. The culprit was clostridium tyrobutyricum, a gassy bacteria that produces acids and hydrogen gas that can affect taste and make the cheese crack and bubble.

We sold some to friends and family, we donated some to food banks, but some had just to be thrown away. We lost some money.

I should have done a few batches, wait and see how they turned out, then done some more instead of going full into it.

We’ve changed some things at our farm to prevent this from happening again. We now add another bacteria to inhibit the other bacteria culprit.

It’s been over three years now that we’ve been making cheese, and our sales have doubled every year.

Make sure you’ve done your homework before you take a big leap. Just because it works on a small scale, it doesn’t seem it’s going to work at on a large scale.

“I underestimated the power of online marketing.”

I wish I would have gotten on board with social media sooner. I had just joined Facebook when I opened my practice three years ago.

I knew social media was an important marketing tool for businesses such as retail stores or restaurants, but I didn’t realize how beneficial it could be in health care. As a Facebook rookie, I wasn’t taking full advantage of it. I relied on more traditional marketing methods such as mail-outs and didn’t realize the power of social media as a marketing tool. It allows you to reach a broader audience, often at a lower cost or even for free.

There was a learning curve over the last three years during which I familiarized myself with social media channels including Facebook. I learned what types of posts people are interested in, what content engages potential customers or when to pay extra to boost a post. During the last year I feel like I’ve gotten a better grasp on doing that.

I have 800 likes on my Facebook page, which I consider an awesome number for a dental practice in Nova Scotia. I owe a lot of those ‘likes’ to the buzz generated last year when I was a 2014 BDC Young Entrepreneur Award finalist. It was like a crash course in marketing myself and my business!

Having an online presence has definitely got us some new patients. I post up to three times a week on Facebook. We want to have good quality posts that educate and engage our customers.

Related: 8 tips on how to be taken seriously as a young entrepreneur