Three Saskatoon core neighbourhood schools to be replaced with one school 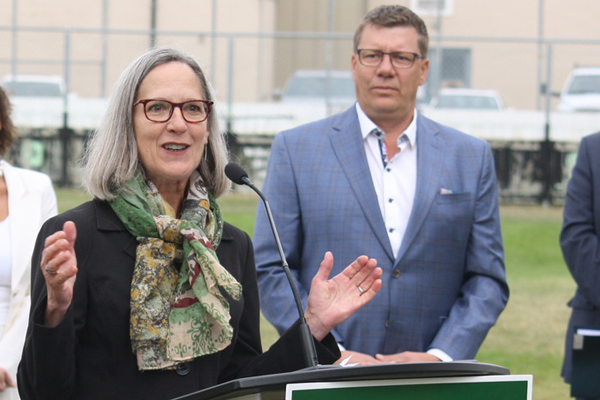 Colleen MacPherson, Saskatoon Public Division Board Chair, at the announcement for the new school in Saskatoon.

Three historic elementary schools in core neighbourhoods in Saskatoon will eventually be replaced by one large, new school.

Planning and design work for the 500-student pre-kindergarten to grade-eight school will begin down the road in 2022, Premiere Scott Moe announced recently in Saskatoon. It is scheduled to open in fall 2024.

The $29-million facility will replace Princess Alexandra, King George, and Pleasant Hill elementary schools, all of which have operated in Saskatoon for at least 60 years.

“Our government recognizes the importance of investing in supports for students and families, to ensure they have access to a modern learning environment they can grow in,” Moe said.

Saskatoon Tribal Council Chief Mark Arcand said the new school, “will be a shining star within the neighbourhood, providing a sense of hope and opportunity for positive change so people can have a quality of life through education,”

While Arcand believes the upgrade from century-old schools to a modern one will be a “great thing”, he understands there may be concerns from families who are losing a school close to home.

“Absolutely, we're always worried (that schools are being closed in communities that serve a high percentage of Indigenous people). I'm sure there are parents that have that same concern. For me, how are we supporting that so they don't have to be worried? Are we providing free bussing? Which I think there will be for the new school,” Arcand said in an interview.

The STC will do community consultation to make sure no one falls through the cracks, he said.

He believes Saskatoon Public Schools (SPS) will use the four years prior to the school opening to make sure everyone is taken care of.

Students at the new school, as well as youth and families in the community, will also have access to after-school and evening programming at the White Buffalo Youth Lodge, he said.

“We will have more people accessing services from the White Buffalo Youth Lodge, which will be a great thing... because now it's not just programs for kids, it's programs for families. So it's going to help us provide better opportunities for families that need extra supports,” Arcand said.

SPS Board Chair Colleen MacPherson, said that, “while the three schools have welcomed and educated thousands of youngsters over the years, the facilities themselves – two of which are more than a century old – simply cannot keep up with the learning needs of students.”