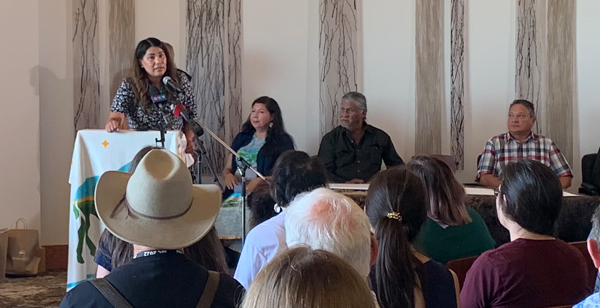 Darlene Brander, Wanuskewin CEO, spoke about the relationship between Indigenous culture and bison during the Buffalo Treaty signing. Photo supplied

Seven First Nations from across Canada and the United States gathered to witness the signing of the historic Buffalo Treaty.

The Buffalo Treaty is agreement of cooperation, renewal, and restoration, and aims to preserve the prairie ecosystem and Indigenous culture.

On July 15 at Wanuskewin Heritage Park, the First Nations signed with the goal of creating a national agenda to return the bison to the land and allow them to roam freely between the United States and Canada.

“It’s about renewal of our life ways,” said Leroy Little Bear, a member of the International Buffalo Relations Institute.

He says the Buffalo Treaty is about conservation and partnership with the buffalo as a way to preserve culture.

The first Treaty was signed in 2014 on Blackfeet Territory in Montana, with four additional Alberta First Nations signing in 2015.

This time around representatives of the Battlefords Agency Tribal Chiefs, along with Nekaneet First Nation and the Louis Bull Tribe from Alberta, joined the Buffalo Treaty as new signatories.

“Today is a special day,” said Darlene Brander, Wanuskewin CEO. “You get to witness the honouring, the recognition, the relationship that people have with bison. It’s an important relationship, and one that leads to conservation.”

Wanuskewin re-introduced bison to the region in 2019. The park is now home to 24 bison, including six calves born at the park this year.

Mistawasis Chief Daryl Watson spoke on the importance of bison to Indigenous culture, and how he hopes the recommitment to treaties creates broad cultural growth.

“We are the protectors of Mother Earth, of water, of the air,” said Watson. “With this peace treaty, it reignites and revitalizes the importance of the connection we have through ceremony and songs but, more importantly, the revitalization of our language. We’ve always had that true connection to Mother Earth and to the Creator and spirit world. This is one aspect to how our nation has come together with other nations to revitalize treaties.”

Watson hopes other First Nations reaffirm their commitment to treaties.

Little Bear said the Buffalo Treaty protocols involve taking the Treaty home and having a ceremony in the community with your people to let them know they’ve entered into an agreement.

The seven First Nations of the Battlefords Agency Tribal Chiefs will have a signing event in August at Sweetgrass First Nation.

“We need to bring the buffalo back, and well, it’s happening very fast,” said Little Bear. “That was the dream of our Elders when the Buffalo Treaty came into existence.”