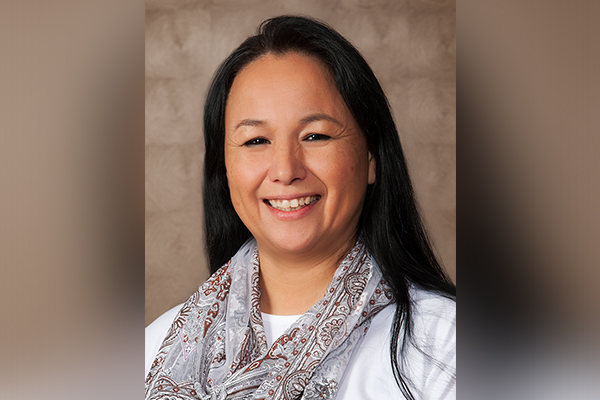 Kimberly Greyeyes, who was elected last year to serve on the SSBA executive, is now encouraging others to vote and run in local elections. Photo submitted by Kimberly Greyeyes

Kimberly Greyeyes is getting used to seeing her name on ballots and she’d like to see more Indigenous names on school board ballots this fall.

Greyeyes is a fourth-generation residential school survivor, and while she was growing up on a family farm on Peepeekisis Cree Nation, her parents taught her that “we’re federal,” and her family did not have a place in provincial politics. But she has come to believe this is exactly where she belongs.

“I’ve learned we have to get involved,” she said.

Greyeyes was elected to the Prairie Spirit School Board representing Muskeg Lake Cree Nation in 2016 and quickly impressed her fellow board members - the first-term trustee was also elected last year to serve the Indigenous Constituency on the Saskatchewan School Boards Association (SSBA) executive.

She is the first Indigenous woman to hold this seat, representing the 11 per cent of school board trustees in the province who are First Nations or Métis.

In her role on the executive, Greyeyes has been promoting stronger partnerships between First Nations and provincial schools.

“[At Muskeg Lake] we’ve built a local cultural cabin … and at Blaine Lake, they’ve had their first ever powwow,” she said. “And this cultural cabin benefits both schools. It gives our First Nations students somewhere to go to do their cultural learning, and all provincial students come out and do their land-based learning. So we’re reducing the lines between First nations and non-First Nations children, and I’ve advocated for things like that.”

She is also in the early stages of working on an accountability framework for the TRC Calls to Action, so schools and school boards will be able to measure their progress.

SSBA executive director Darren McKee says Greyeyes’ work and perspective on the executive has helped focus a spotlight on Indigenous student needs throughout the province.

“As an Indigenous person, as I came into this role, I found there wasn’t as much focus on that as there is today,” McKee said.

“I think that’s growth in the system. It certainly makes a difference when it comes to responding to the needs of all kids. When there are folks out there you can relate to, it makes the whole thing much easier to approach. Kimberly has provided us with an opportunity to highlight and profile trusteeship from an Indigenous perspective.”

Greyeyes, who is up for reelection this year, decided to run in 2016 as her older children were getting to the end of their high school careers.

“I’d had six kids go to our local school, and I had run into some challenges, which made me have to learn how to move things forward and go through official processes,” she said.

“I’ve lived the inequalities in the availability of programs and services for our First Nations children. That was one of the biggest reasons I chose to run - I’ve lived it, I’ve been there.”

She also brings her career background in administration and human resources to the role, and has been furthering her own education, even as she advocates for youth in schools - she is taking classes at the University of Saskatchewan toward a commerce degree.

There is still time for people to put their names forward for school board trustee by going to their school board’s website - the initial nomination deadline is October 7th, and a second call for nominations will go until October 21st if necessary. The election will take place November 9th, and Greyeyes hopes to see many Indigenous candidates on the ballot this year.

“There was a time, quite honestly, when I couldn’t have imagined somebody like me sitting as a school board trustee, let alone for the province, (because) number one, I’m female, and number two, I’m Aboriginal,” Greyeyes said.

“Being the Indigenous trustee voice is one of my biggest priorities right now. I want people to realize that they can do it - they can run, they can be elected.”