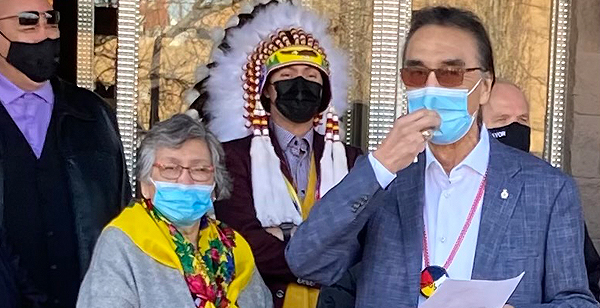 Lawrence Joseph, far right, was the master of ceremonies for the official opening of the Cumberland Crossing Inn in Prince Albert on Mar. 15. Photo supplied

The former Quality Inn in downtown Prince Albert has been given new life under a group of First Nations partners.

The facility has been purchased by the Timanaska Development Corporation and the Saskatchewan River Business Corporation, which includes the Cumberland House Cree Nation (CHCN) as a partner.

It had been sitting vacant for close to two years.

In addition to standard hotel rooms, plans are for the facility to offer student housing and a 24-hour daycare.

The hotel is located in close proximity to the new University of Saskatchewan campus in Prince Albert.

CHCN Chief Rene Chaboyer said even though we are in the midst of an economy slowed by the COVID-19 pandemic, the shuttered hotel presented an investment opportunity the partners didn’t feel they could pass up.

“We kind of saw a diamond in the rough here with the opportunities,” he said. “Not only just the hotel at the time but our original plan was to turn this hotel into student housing and some easy living for some elders.”

The partners also plan to offer rooms in the facility for northern Saskatchewan residents who have come to Prince Albert for a few days for medical appointments.

The facility, which will now be operated under the name of Cumberland Crossing Inn, will also offer these guests transportation to and from Victoria Hospital for their appointments.

Orrin Greyeyes is a former band councillor for the Muskeg Lake Cree Nation.

He is also the current president and CEO of Timanaska Development.

Greyeyes said you have to think outside the box when it comes to investments like this one.

Chaboyer said in order to make the hotel a feasible operation, the partners realize they need to operate it as a mixed-used facility with a focus on helping northerners who come to Prince Albert for short, medium- and longer-term visits and need an affordable place to stay in the downtown core.

That said, the Cumberland House chief said they are willing to look at offering a number of services to make the facility a success but one thing is non-negotiable - there will be no alcohol permitted on premises.

“First and foremost, take the bar out and kind of make it a lot easier for First Nations to come and spend the night, spend the week – and students, they always need a place to stay,” he said.

About a year after the Quality Inn closed, the city took over the property for unpaid taxes of close to $900,000.

This is roughly the same price the city has now sold the property to the new partners.

Greyeyes said the partnership still needs to invest about three-quarters of a million dollars in renovations to get the facility up to where they want it to be.