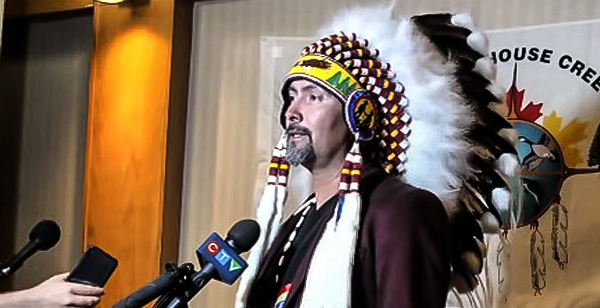 Chief Rene Chaboyer speaks to press at the signing of the Declaration for economic sovereignty through river projection. Photo by Monica Manuel

In a declaration signed on June 10, Chief Rene Chaboyer stated the nation will develop its own laws and mechanisms, under their own terms, to protect Kitaskīnaw – the river delta.

“Let it be known to everyone, we have title to our homelands that is everlasting,” Chaboyer said at the signing.

The upper and lower portions of the Saskatchewan River Delta occupy approximately 10,000 square kilometres, making it one of the largest active inland deltas in North America.

The Declaration, which sets out a policy on economic development and protection of the delta, is built upon a larger Treaty 5 declaration on sharing lands and natural resources with the settler society, Chaboyer said in statement.

“The impoverished state of our nation is perpetuated by legislative agenda of the settler society directed at our people. This can no longer be tolerated,” the statement reads.

The nation is open to working with other jurisdictions on permitting and licensing work to conserve its homelands - especially that of Kitaskīnaw, Chaboyer said in the statement.

“The sharing of the benefits from our resources with our consent through business arrangement will be a business model in Treaty 5 territory. It is also Cumberland House's position to protect the wetlands, which is a gift from the Creator that accords a sacred responsibility,” the statement said.

Dr. Priscilla Settee, Professor in Indigenous Studies at the University of Saskatchewan and member of Cumberland House Cree Nation, said the Declaration is an important first step in the commitment to sovereignty.

“I think it's a pretty big deal in the sense that when the Natural Resource Transfer Agreement Act was established unilaterally, without consideration for our community, it had a huge impact. It's one of the big issues on why there's challenges today,” said Settee.

“It's certainly overdue. It's needed. You see undermining of traditional economies for decades, and there's been tinkering around by various governments to sweep over the issues. So, it's time.”

Settee recently completed a one-year fellowship at the David Suzuki Foundation, in which she researched the effects of industry and climate change on Indigenous trappers. She references the E.B. Campbell Dam, owned by SaskPower, and built in the 1960s downstream from Cumberland House, which she said has had tremendously adverse impacts on the environment and resources in the area.

“This has led to extreme changes in diet, in environmental integrity, in the wellbeing of people who love the land, who watch every year as the environment gets more and more devastated. The Chief and Council (at Cumberland House) recognize that. They said enough is enough,” she said.

Chaboyer said he would like to see the dam removed or improved and wants the band to have a stake in SaskPower projects.

Provincial and federal government have been running away with resources, said Settee, such as clearcutting practices or mining peat moss – unsustainable practices that need greater input of Indigenous values. “It's symptomatic of what is going wrong in society, vis-à-vis the Indigenous nations. When we have a culture that has been left in the margins by successful government, I think we have to start to look at a different model of government, different players, different considerations. So, there's a lot to unpack and consider what this means for Cumberland House and other communities.”