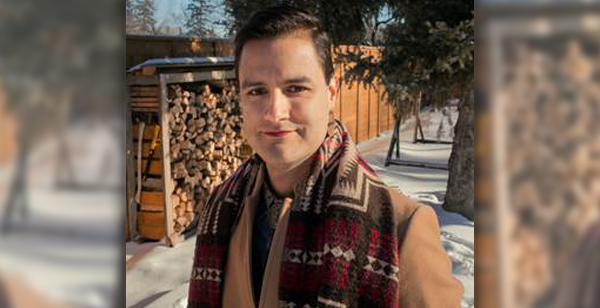 John Hampton, newly-appointed executive director and CEO of the MacKenzie Art Gallery in Regina, stands in his backyard. Photo by Amber Christensen

When artist and curator John G. Hampton was appointed executive director and CEO of Regina’s MacKenzie Art Gallery, he became the first Indigenous person to run a major public gallery in Canada.

“I think these types of milestones are worth celebrating, but they’re always a little more complicated. Each ‘first’ speaks to a long history of absence and exclusion,” Hampton said in a recent interview.

Taking on this role means continuing a legacy of Indigenous leadership and vision at the MacKenzie, while bringing new perspectives to the forefront.

“I have some very distinct and positive memories of the MacKenzie,” he said. “One of my fondest memories is as a 15-year-old kid in Regina, I was experiencing it as a pretty segregated city, where there is very much a white Western environment and then going to separate Indigenous spaces for powwow or ceremony.

“I think the first time I really saw that blended was at the MacKenzie with the powwow and art history exhibition that was co-curated by Bob Boyer and Lee-Ann Martin.”

“It was a profoundly impactful moment to feel reflected in the gallery - to have that sense of home in a major cultural institution in the city,” he said.

“That’s something I feel very passionate about trying to expand… There’s more than just Indigenous and European settler populations here in our city. Extending that sense of welcomeness to more and more communities is one of our main goals right now,” he said.

“I frame that, personally, through our own treaty obligations and through the spirit of hospitality that has been shared with me by the Elders who have welcomed me here to this community.”

Hampton said he was born in the States and is a member of the Chickasaw Nation.

When he joined the MacKenzie as director of programs in 2018, he thought of those positive impressions and has worked to share them even more broadly.

“It’s definitely a continuation of that type of work, from a professional level,” he said. “From an individual level, it’s harder to place yourself within those types of histories.”

David Garneau, a professor of visual art at the University of Regina, has known Hampton for years and has served with him on the board of the Indigenous Curatorial Collective, a national non-profit focused on creating opportunities, networks and mutual support for Indigenous curators and artists.

Garneau thinks the MacKenzie will thrive under Hampton’s leadership.

“He’s got a background working in artist-run centres in regional galleries and national centres like Toronto,” said Garneau. “He’s got a full, good rounding in terms of his education. The fact that he’s Indigenous and has ties to Regina are certainly helpful. And he’s just a strong curator and administrator, and he’s aware of the local scene - he grew up in this environment.”

In his work at the Gallery so far, Hampton has helped establish a digital lab, overseen the restructuring of the Indigenous Advisory Circle with the appointment of Betty McKenna as the Gallery’s first Elder in Residence, and developed a partnership with the University of Regina focused on decolonizing curatorial practices.