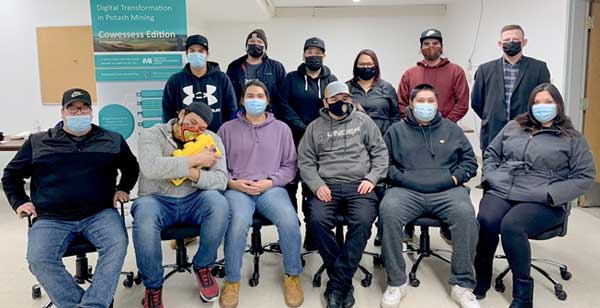 The group of students who are part of the inaugural Digital Transformation in Potash Mining training program facilitated by Morris Interactive, which started January and will run until early March. Photo submitted

In a classroom on Cowessess First Nation, 12 students are learning the skills that could launch them into new careers in mining.

“I like that it is giving a great opportunity to be getting better jobs and better stability for families in the future,” said Robert Kay.

He’s part of the inaugural Digital Transformation in Potash Mining training program facilitated by Morris Interactive, which started Jan. 10 and will run until early March.

The curriculum was built after Morris Interactive had heard from clients in the mining sector who wanted to hire more Indigenous workers, but there was a training gap.

“Traditionally when people think of entry-level jobs in potash, they’re thinking of working right in the mine with a pick and shovel, but what we’re talking about is working with technology,” said Mathew Cey, CEO of Morris Interactive.

“It’s very innovative. They have a lot of creative ways of getting the information across to you,” said Kay. 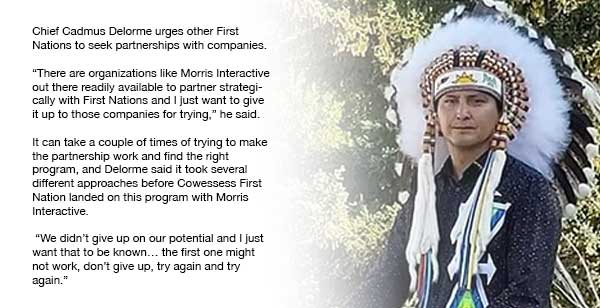 “You need to be crystal clear in case you are taking directions over a phone or walkie-talkie,” said Tara Keshane, another student with a background as a heavy equipment operator. “I have very high hopes, and confidence in this course, that it is leading me in the right direction.”

“We always wanted to do a project together and this ended up being the one,” Cey said.

The partnership was extended to include surrounding nations and Mosaic.

“Economic self-sustainability doesn’t just mean we are going to find money for the nation, it also means investing in citizens so that they can go out there and flourish,” Delorme said, adding he was proud the community is hosting the training.

He gave opening comments to the students on the first day of class.

“They see their future is laid out for them,” he said. “If they can fulfill this course, it will make their home fires stronger, and stronger home fires in our communities lead to stronger nations, so it’s really uplifting to see.”

The 12 students were selected from 60 applications, which Barry Sparvier, Cowessess’ director of employment, training and support, called “quite a task.”

“It’s going to be a total success, I have no doubts on that,” he said. “ It’s a good group of students all inspired to do what they came here to do, and they want to have a career in mining.”

Morris Interactive’s Cey said others are looking at this as a model to become engaged with Indigenous communities to provide meaningful employment and economic development opportunities. “We’re proud to be involved; to us it’s a form of reconciliation in action,” he said.