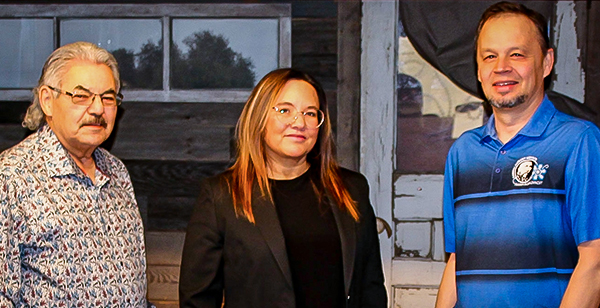 Lisa Bird-Wilson is having a good year. She will become CEO of Gabriel Dumont Institute (GDI) in April and her newest book will be released in Canada in August.

Bird-Wilson is no stranger to the internal operations of GDI, having served various roles with the Métis institution for almost 24 years.

“I feel like I'm a fixture here now,” she said.

“I've been lucky to have a number of leadership roles that have prepared me well for this. I've been happy to contribute in those different ways. I'm trying to say nicely that I didn't have this driving ambition to head the institute, but at the same time, I'm thrilled and happy to take this role.”

Bird-Wilson joined GDI in 1997 as a community liaison coordinator and worked her way up to senior management roles, including director of training and employment, and acting Director of Dumont Technical Institute.

“GDI is a pretty complicated organization with its various parts and how everything fits together like a puzzle,” she said.

The Institute has 200 full-time staff working in 20 locations across Saskatchewan.

“I feel really confident in terms of my own knowledge of those parts of the institution. It's important in this transition that I'm a known entity across GDI. That kind of stability and confidence is going to be important going forward.”

Bird-Wilson will take over from Geordy McCaffrey, who is stepping down after 18 years as CEO.

“Myself, the Métis people of Saskatchewan, and the entire province can rest assured that GDI's strong future and adherence to tradition remains in the most capable of hands,” said McCaffrey in a written statement.

As she settles into the new job, Bird-Wilson’s first novel, Probably Ruby hits shelves in Canada via Doubleday Publishing. In spring 2022, it will find its way around the world via Hogarth Books, a division of publishing giant Penguin Random House.

Probably Ruby, about an adopted girl who searches for her Indigenous identity, is a way to humanize the Sixties Scoop, Bird-Wilson said.

“It's something near and dear to my heart. That's where my fiction tends to go. I was adopted as a child, and spent my life making my way back to my roots,” she said.

Her three previous books are in three other genres: the non-fiction An Institute of Our Own, about the history of GDI; the book of poetry, The Red File; and a short-story collection, Just Pretending, which was selected by the Saskatchewan Library Association for the 2019 One Book One Province literary engagement project.

Bird-Wilson also helped establish and run the Saskatchewan Aboriginal Writers Circle Inc., which hosts the annual Ânskohk Aboriginal Literature Festival. She says she will continue to write in spurts, when her life allows.

The roles at GDI and as a writer are intimately tied for her.

“To make the connection to (writing and) GDI, it's one of the reasons I think the cultural aspect of the Institution's mission is so important to me. I can see how knowing that culture builds confidence and success,” she said.

“We have to know who we are first, then we can learn and accomplish things. We have to have that confidence in our identity. That's what I see GDI doing for the students and learners and youth who come here - to help build that identity and cultural aspect in order to foster confidence and success in who they are.”