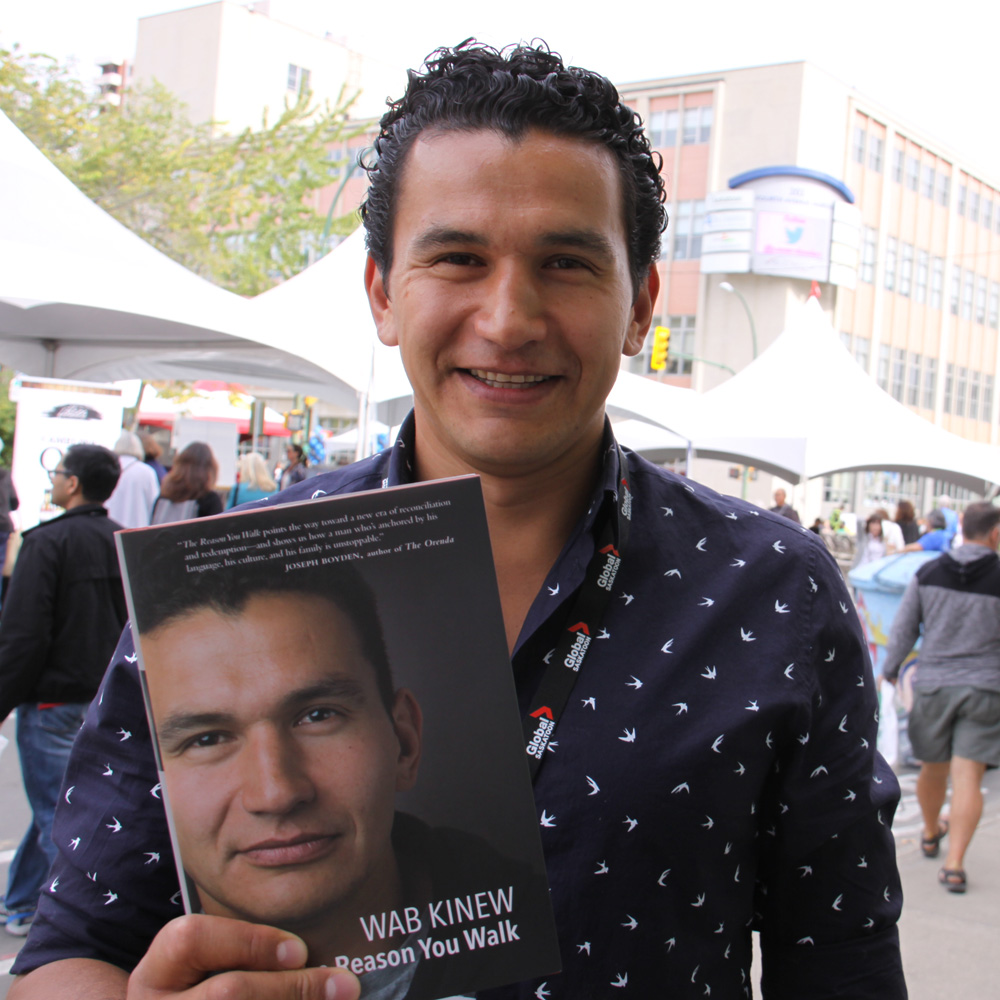 Wab Kinew learned a lot about his dad and himself during the writing of The Reason You Walk. The Winnipeg broadcaster and musician decided to spend a year reconnecting with the accomplished but distant man who'd raised him after his dad was diagnosed with terminal cancer. In that time, Kinew revisits his own childhood in Winnipeg and on a reserve in Northern Ontario and he learns more about his father's traumatic childhood at residential school.

The book was quite the revealing and different process for Wab Kinew the journalist who is used to shorter mediums like songs, documentaries or news clips to tell his stories.

“It (writing a book) is a deeper dive. It took me like a year to write the book including the editing process. That’s the longest I’ve ever spent on one medium,” said Kinew before he read parts of his book at The Word On The Street Festival. “It is a much deeper dive and the medium of print allows you to explore things more wholesomely and to articulate really quickly...even in 8th Fire, we were limited by the amount of words you can get out in a 44 minute episode but this has probably about 75,000 words in there, so I got a chance to speak my peace.”

The powerful book chronicles his dad's last year of life and the relationship the two men have together. His father, Tobasonakwut, was both a beloved traditional chief and a respected elected leader who engaged directly with Ottawa. Internally divided, his father embraced both traditional native religion and Catholicism, the religion that was inculcated into him at the residential school where he was physically and sexually abused. In a grand gesture of reconciliation, Kinew's father invited the Roman Catholic bishop of Winnipeg to a Sundance ceremony in which he adopted him as his brother.

Kinew writes of his own struggles in his twenties to find the right path, eventually giving up a self-destructive lifestyle to passionately pursue music and martial arts. Since then he has quickly grown to be the voice of a new generation of Indigenous people that are wired in and politically savvy.

But he is still working on himself. The process of writing the book opened Kinew’s eyes to who he is personally.

“What I learned that in writing about my father in residential school and then about how my father was a parent to me, I recognized a lot of myself as a father towards my sons and how I make them feel,” said Kinew. “Probably make them uncomfortable. Being too quick to anger. Being too much of the disciplinarian. In my heart and my mind I know I want to be the perfect passionate supportive dad who is cultivating resilience but I know there is still some part of me that is a hangover of the residential schools.  So that’s probably the most important thing I learned to address that and be more patient.  It’s hard right. Kids are acting crazy and talking back and not listening, it is hard to be Ghandi or Nelson Mandela in those moments, but I’m trying.”

Once this book tour is finished, Kinew will likely be back out on another one. Next up is something a bit less intense.

“Thanksfully the next project is more light hearted,” said Kinew. “It is a children’s book and will be a celebration of different Indigenous heroes from across North America but for a young audience so we can teach people and kids of all backgrounds to celebrate indigenous leaders and athletes.”

Just like his first book, The Reason You Walk celebrates his hero, Tobasonakwut.