Vet continues to fight for comrades 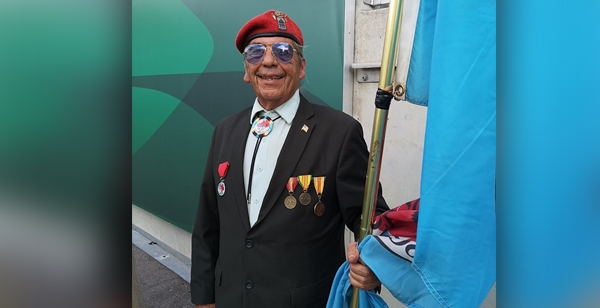 Grand Chief Steven Ross says that one of the most critical services the association provides is help navigating the benefits system.

“There are many benefits [First Nations veterans] are entitled to from Canada, but there’s a lot of red tape that you have to cut through, and that’s where it gets very discouraging,” said Ross. “But we will continue to fight for our people, for our veterans.”

The SFNVA also participates in ceremonies, commemorations, educational events and powwows, as well as organizing military funerals and grave markers for veterans who have passed away. In recent years, the association has shifted towards participating in specifically Indigenous-centered ceremonies on Remembrance Day.

“Before, we used to participate with the legions – and that’s okay, that’s good, nothing wrong with that,” said Ross. “But we were always put in the back; the back of the parade, the back of the line.

“And some of our politicians saw that, so they decided to change things, and we started having our own ceremonies at the reserve and the Grand Council level.”

For Prince Albert SFNVA president Emile Highway, raising the profile of the association, its work and its legacy can have an impact across generations.

“We try to give our young people a sense of pride in their dads and grandfathers and uncles and so on,” he said. “A significant number of Aboriginal people joined the military and served in all three branches, and I think it’s important for our young people to know.

“I also think in particular, for older people who went to residential school – always being told that we were inferior to other races, that we would never amount to anything – it’s important to raise the profile of Aboriginal veterans and to let people know that Aboriginal people are intelligent and can make contributions to the betterment of society.”

Ron “Rocky” Redwood, a member of the SFNVA executive, says that it is important for him to continue the association’s work.

“After I came out of the military, I got involved with [the SFNVA] because I was searching out, to see what they could do for me,” he said. “And one of the old veterans told me ‘Rocky, you don’t know how what you have to say might help somebody else’. That got me started doing what I’m doing, and I just continue. Somebody’s got to be here.”