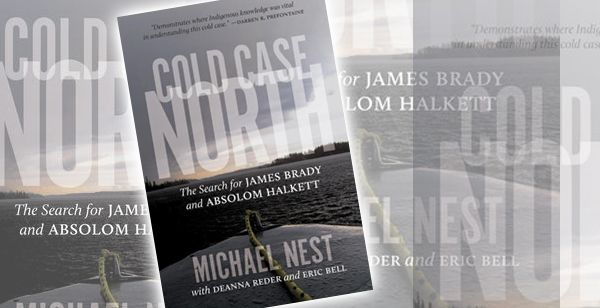 The unsolved mystery of two men who went missing in northern Saskatchewan in the late 1960’s is the subject of a new book.

Jim Brady and Absolom Halkett were last seen in the area of Foster Lake, about 193 kilometres northwest of La Ronge, in June 1967.

The two were prospecting in the remote area.

Their remains have never been located and local stories have continued to prevail over the years that they were victims of foul play.

Eric Bell of La Ronge is one of three co-authors of Cold Case North: The Search for James Brady and Absolom Halkett.

Bell became involved with an active search for the remains of the two men in 2017.

“As we got more and more involved into it (the search), we knew that this was going to be something and when we started finding different evidence and stuff, we knew that we had to tell that story,” he said.

The other two authors of the book are Bell’s cousin, Deanna Reder, and Montreal-based researcher Michael Nest.

Reder is also the chair of Indigenous studies at Simon Fraser University.

In July 2018, the search team came across what they believe could be the men’s remains in the northeast corner of Lower Foster Lake.

With the assistance of Grandmother’s Bay search and rescue’s underwater sonar vehicle, they took pictures and video of an area which revealed what have been termed as “unnatural anomalies.”

This information was then submitted to researchers in Saskatoon and Washington, D.C.

At present, the RCMP do not believe the new information is enough to warrant a deep dive and more detailed inspection of the area.

Despite more than half a century having passed since the two men were last seen, interest remains strong in their unsolved disappearance.

Bell said the prominence of the two men, in particular Brady, has played a large role in sustaining this ongoing interest.

“I think over time the mystery of him (Brady) missing and the different stories that were told of how he went missing and what not, kind of started a legend.”

Cold Case North: The Search for James Brady and Absolom Halkett is published by University of Regina Press.