The Word On The Street packs downtown YXE 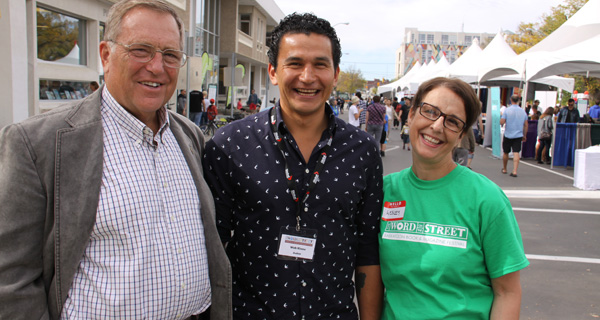 Wab Kinew was one of the big draws of this year's The Word on the Street.

Book lovers were in heaven as a sunny Sunday and some of Canada’s best authors drew people to the fifth annual The Word On The Street magazine and book festival in downtown Saskatoon. Elite authors including Chef Michael Smith, Margaret Trudeau, W.P. Kinsella and Wab Kinew helped draw huge crowds to various tents for a day of readings, poetry, culture and book signings.

Check out our Photo Gallery.

Wab Kinew was in town as part of the tour for his newly released book, The Reason You Walk, a book that covers the time when his father was given a diagnosis of terminal cancer. The Winnipeg broadcaster and musician decided to spend a year reconnecting with the accomplished but distant aboriginal man who'd raised him. The book was quite the revealing and different process for Wab who is used to shorter mediums like songs, documentaries or news clips to tell his stories.

“It (writing a book) is a deeper dive. It took me like a year to write the book including the editing process. That’s the longest I’ve ever spent on one medium,” said Kinew, before he read parts of his book at the Festival. “It is a much deeper dive and the medium of print allows you to explore things more wholesomely and to articulate really quickly...even in 8th Fire, we were limited by the amount of words you can get out in a 44 minute episode but this has probably about 75000 words in there so I got a chance to speak my peace.”

There was something for everyone this year and highlights of this year’s The Word On The Street festival included opening ceremonies performed by the Many Nations Dance Troupe, a Poetry Slam and Open Mic session with Sheri-D Wilson and a Storytelling Tipi. On KidStreet, children enjoyed the Treasure Island Tent and the activities on Literacy Lane. Children participated in a Real Fairy Tea Party, competed in a Buffalo Riddle Relay and participated in the biggest Comic Book Jam ever.

For Wab Kinew, this stop, like any stop on a book tour was special.

“I get to meet all these different people from different walks of life and see what different people take out of what you put out there right?” said Kinew. “You can say the same thing to 10 people and there will be a variety of interpretations and responses so it’s interesting for me, too, to see how they respond to different parts of the book or of things I say.”