The University of Saskatchewan receives a Christi Belcourt original 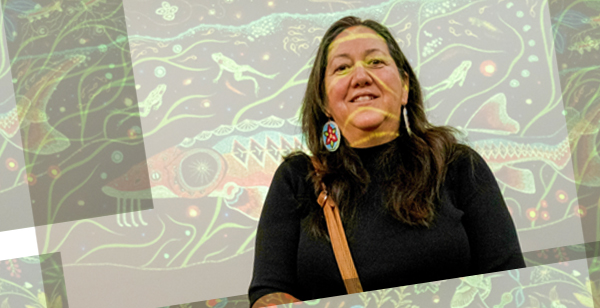 Christi Belcourt at the unveiling of her recent art piece called Every Dot a Prayer for the Saskatchewan Rivers. It is now housed at the College of Law Library at the University of Saskatchewan in Saskatoon. Photo by Liam O’Connor


Not everyone can own a Christi Belcourt original painting, but seeing one in person has become a lot easier for students at the University of Saskatchewan.

The world renown Métis artist’s latest piece called Every Dot a Prayer for the Saskatchewan Rivers is now housed in the College of Law Library.

Belcourt is not only a visual artist, but is an activist, who often uses her art to draw attention to issues she’s passionate about such as the water, the environment and the impacts of colonization.

The painting was unveiled in November during a panel discussion at the university. It was moderated by Marilyn Poitras and included both Belcourt, and acclaimed Métis author Maria Campbell. 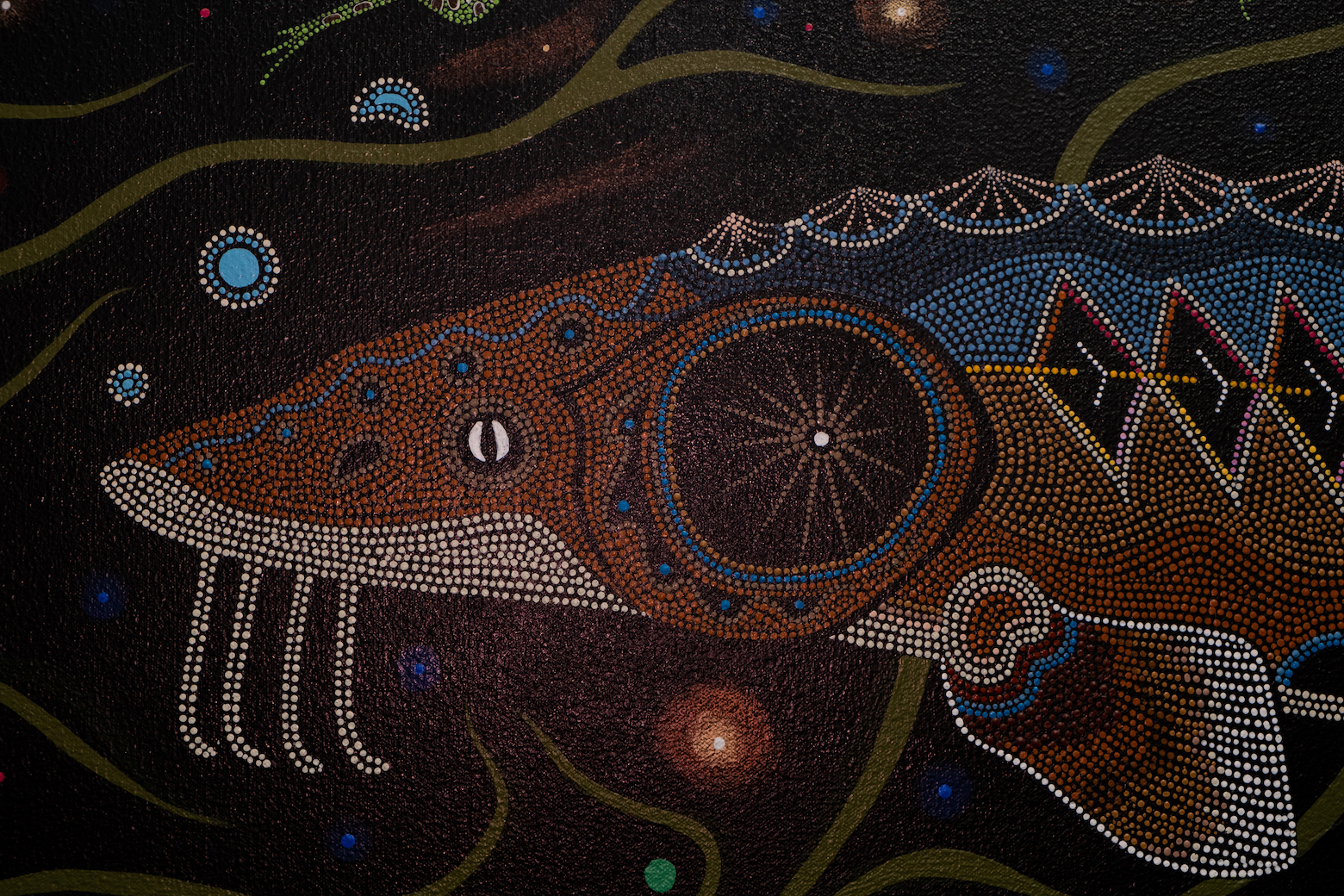 A close up of the large lake sturgeon in Christi Belcourt’s latest painting called, Every Dot a Prayer for the Saskatchewan Rivers. She chose to prominently display the sturgeon in her painting because it has been recently placed on the endangered species list. Photo by Liam O’Connor


“Every Dot a Prayer for the Saskatchewan Rivers,” depicts both the water and the wildlife. There are thousands of dots of paint within the intricate piece, that make up different animals and nature.

The Saskatchewan River is a “life giver” according to Belcourt, and therefore is sacred. The river flows for about 550km through the prairie provinces.

“Water holds life the same way a child or a newborn is held in his mother’s womb,” said Belcourt. “Water holds life for this planet and for all of us. The most sacred of elements is water because that’s what we’re born in and so that’s why half of the painting is covered in water.”

The centerpiece of the painting is a massive fish, which Belcourt said represented lake sturgeon. She wanted to highlight the importance of the fish because it has been placed on the endangered species list. 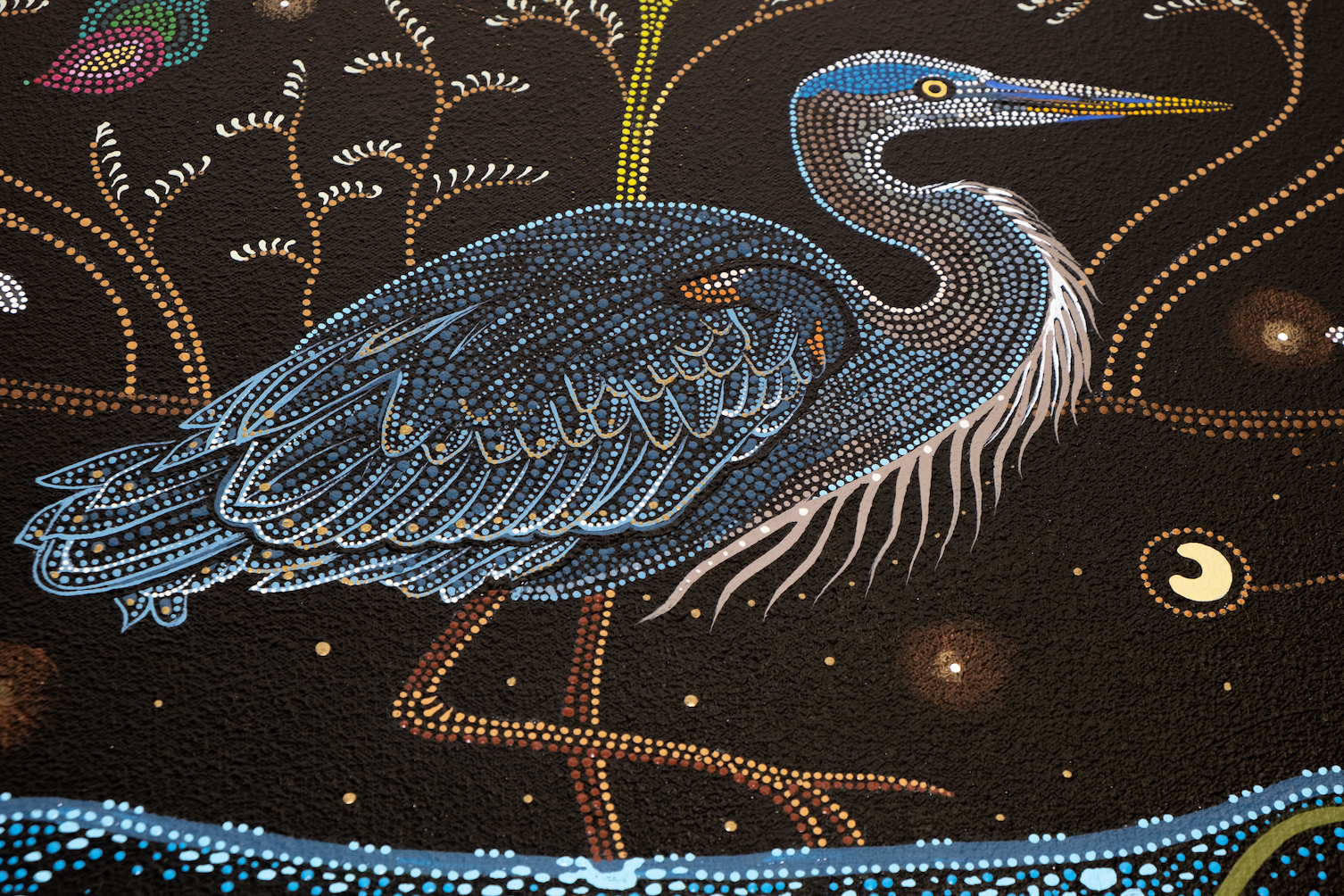 Every bird, fish and animal Christi Belcourt included in her latest painting are on the endangered species list. As the title suggests the painting is a compilation of dots, which is Belcourts signature style. Photo by Liam O’Connor

Burrowing owls are also featured in the painting because of their endangered status. Belcourt explained tailing, farming and lack of natural grasses pose a threat to the feathered creature.

Campbell also voiced concern about the state of the environment.

The 82-year-old has seen many changes in her lifetime. Campbell recalled fishing for sturgeon with her family when she was a little girl and said the fish were so much larger back then compared to now.

It is something even her father noticed. He told her stories of when he was a child and the fish were huge and it was not unheard of for a single sturgeon being able to feed10 families.

“The very first protector (Indigenous people) had was (the) water, that was wrapped around the womb, and protected them,” said Campbell. “(This) is why women are our water keepers and why we should all be looking after water because water was our first protector, and it needs our protection now.” 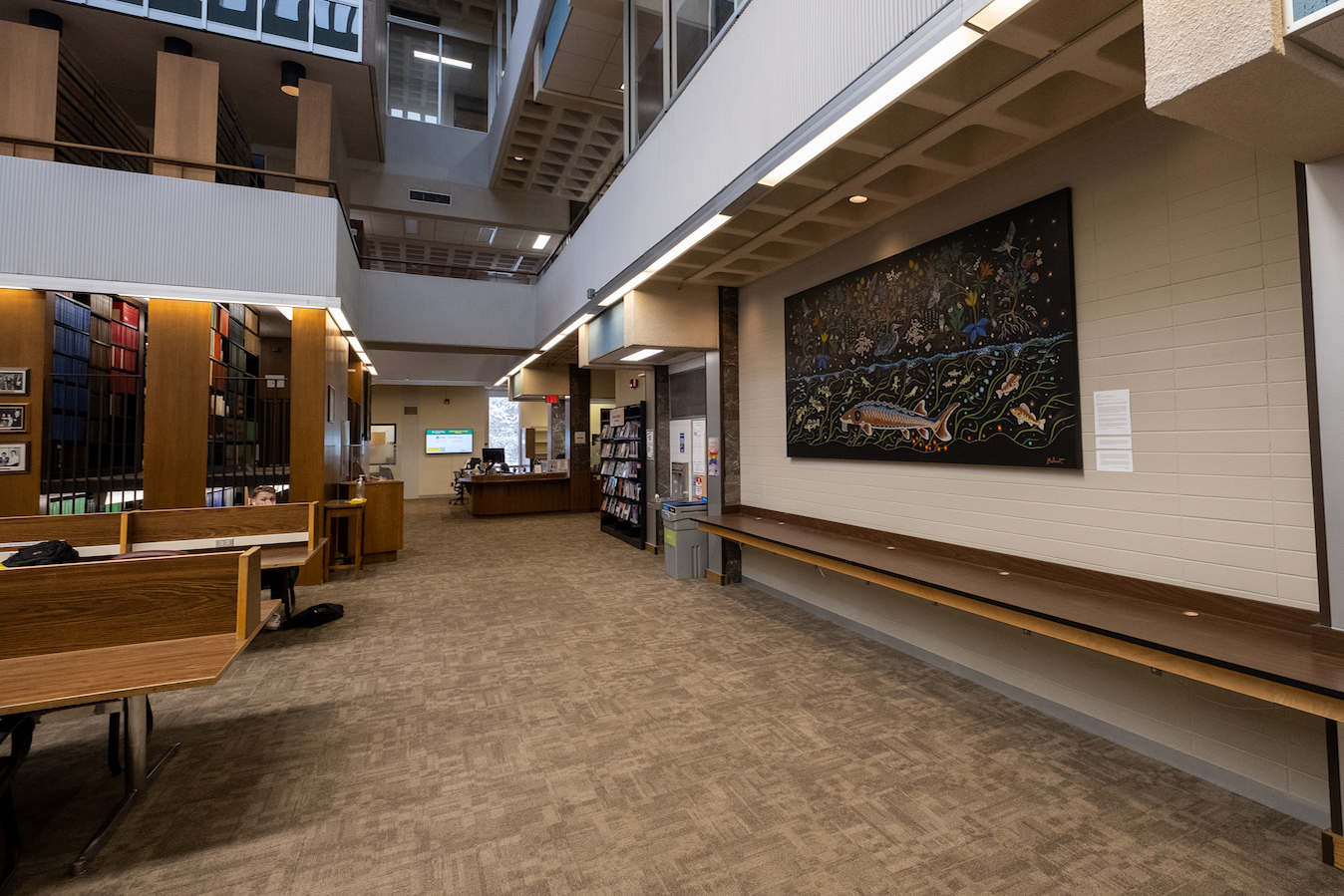 A full view of Christi Belcourt’s painting on the University of Saskatchewan’s College of Law Library wall. The large art installation was unveiled in November in Saskatoon. Photo by Liam O’Connor

Belcourt feels as though she’s become more fascinated “in understanding and knowing species at risk.” She said that conservation work is key to helping nature regenerate.

The root of environmental problems stems from capitalism, according to Belcourt. In her eyes, tackling corporate capitalism and coming up with a different system is the solution.

“Capitalism is an insatiable beast, that seems to just want to consume, consume, consume,” she said. “And the problem that we’re faced with is that the earth’s way, that it’s run economically, is pushing capitalism as the model under the guise of democracy.”