Public invited to opine on future of John A Macdonald statue 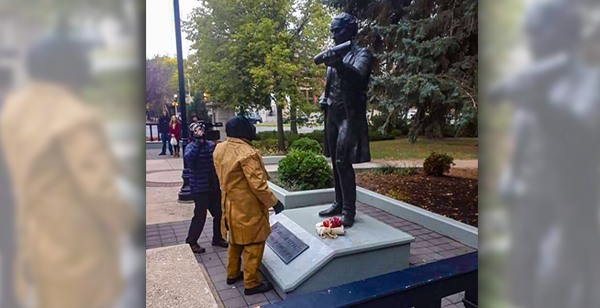 Artist David Garneau confronted the statue of John A Macdonald dressed as Riel’s ghost during a public demonstration several years ago. The statue is now down and a discussion on his permanent home is beginning. Photo by John Lagimodiere

The City of Regina is gathering public comments about the future of the city’s statue of John A. Macdonald, which was removed from Victoria Park after a City Council vote in April.

Emmaline Hill, manager of social and cultural development for the City, says there has already been a lot of engagement with the online portal.

“We’re definitely hearing from people with a diversity of experience, which we had anticipated, and a diversity of ages and other demographic elements as well,” she said.

David Garneau, a Regina-based Métis artist and art professor, moved to the city over two decades ago. When he first came across the statue on its pedestal in Victoria Park, he found it jarring.

“That there’s a statue here, where Riel was hung, was to me deeply ironic - if not offensive, if not a provocation,” he said.

In 2014, Garneau staged a performance at the statue, where he played Louis Riel, addressing the figure of the man who charged him with high treason.

“The suggestion of that performance was... that it’s an offensive thing to have that statue there,” he said. “I was glad to see, after that performance, other people came forward and registered their own feelings.”

Garneau would like to see the statue moved to an educational location, such as the RCMP Heritage Centre, and perhaps turn the park site into a reconciliation garden.

“What I like about that kind of (garden) monument, if you want to call it that, is that it requires care over time and people getting together, rather than a statue that is set up, ignored by most people and silently perturbing others,” he said.

“History is not an object: history is a narrative and because of that, it’s changed and revitalized all the time,” he said.

Some people hope the statue can find a new home and a new context outside of the city.

Cheryl Robinson, is a member of the John Nugent Studio Restoration Committee in Lumsden, said that while Nugent did not design the statue, he did the bronze cast. Robinson and her fellow committee members would like to display it alongside his other artwork.

The City of Regina will continue public discussion by adding information to the website, such as research results, resources from partner agencies and more questions to help them decide on the statue’s future.

“So far (there) is a general acknowledgement that we don’t want to hide history and that’s really aligned with the city’s approach to this work all along,” Hill said.