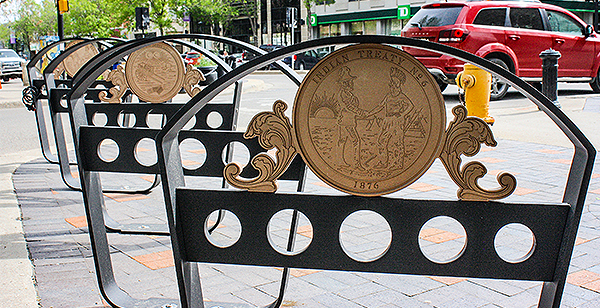 Treaty No.6 Medal and Homeland of the Métis Medals placed among bike racks on 21st Street. Photo submitted

Along 21st Street in downtown Saskatoon, two historically significant medals have been installed along the street on pre-existing bike racks.

The Treaty No. 6 Medal depicts mutual respect and balance between the Crown and First Nations people during its signing in 1876 and the Homeland of Métis Medal, has a bison, Métis sash, and Red River cart representing the history of Métis people prior to the establishment of Saskatoon.

The public art displays, created in response to the Truth and Reconciliation Commission’s Calls to Action, are part of the City of Saskatoon effort to install art to be encountered in everyday life.

“You're starting to see more of this type of art across Canada and North America, which people call ‘functional art.’ It's an opportunity for there to be more public art, moving away from the traditional sculpture-on-a-plinth,” said Kevin Kitchen, Manager of Community Development for the City.

“You don't have to go out of your way to find these things, so in some ways its more powerful and effective.”

Forty medals were installed on the bike racks in April. The city worked with Elders Harry Lafond and Nora Cummings, the Saskatchewan Indigenous Cultural Centre and Gabriel Dumont Institute to provide historical context for the medals, which is posted on signs along 21st Street.

“We want is the city to be a place where Indigenous people feel included, and where their identity, history, and culture is reflected. One of the ways we can do that is through art,” said Melissa Cote, Director of Indigenous Initiatives at the City of Saskatoon.

The medals are part of a recent influx in Indigenous-created public art around the city, as a result of the City prioritizing diversity and engaging the community members' voices when commissioning new public art.

These join more long-time, familiar pieces from Indigenous artists around the city like The Bison are Coming Home (Sutherland Hall) by Andre Gowan, and The Spirit of the Alliance (River Landing) by Adrian Stimson, Happy Grove, and JS Gauthier.

“The art is for creating discussions, and providing people with an opportunity to reflect on the history, the culture, and what it means to the city itself,” said Cote.

According to feedback from the public in 2015, Saskatoon's public art was also sorely lacking colour. Curator Dr. Jen Budney, under Saskatoon's 2020 Placemaker Project, commissioned Ruth Cuthand and Suada Jalian to create vibrant works for three prominent locations in Saskatoon. The collaboration brought Cuthand, an established Cree artist, with Jailan, a young henna artist from Somalia, who grew up as a refugee in Kenya.

“When the two of us got together, we started to think about how we could bring our art together. As she was showing me her henna designs, I thought, 'These would look beautiful with floral beadwork,'” said Cuthand.

The two pieces installed so far, one on 20 Street and another on Second Avenue, have elicited positive reactions.

“People were coming down and saying, 'Wow, is that ever nice!' One woman said ‘Are those flowers for me?' I really liked to hear the response to the art,” said Cuthand.

“If you look around the city, there's very little Indigenous, or other cultures’, work out there. So for me, what really drove it was, one would be on 20th Street. I saw it as an opportunity to show inner city people that they were recognized and mattered in Riversdale,” she said.

Perhaps one of Saskatoon's most striking public art pieces, both in scale and historical significance, is The Spirit of the Alliance, a cluster of figures within a tepee shape, recognizing the War of 1812 and the historical alliance between Dakota Chief Wabasha and Colonel Robert Dickson.

“(The monument) has become a gathering point for people, to celebrate, or to protest. It's delightful to see a piece of work evolve over time. While it has a strong meaning and history to it, people can bring their own ideas to it,” said artist Adrian Stimson, member of Siksika Nation in Alberta.

Stimson said that historically, Indigenous art has been absent from the public realm. The more Indigenous art, culture and perspectives are reflected in our cities, the more Canada will understand its deep history with Indigenous people, he said.

“Like all art, the role of public art is to be a trigger. For people to not only wonder, or have curiosity as to what it is, but to also remind them of our history and enliven the community its placed in,” he said.

“Public art needs to be a strong element in the fabric of any city, town, province, or country, because it really is a reflection of themselves.”