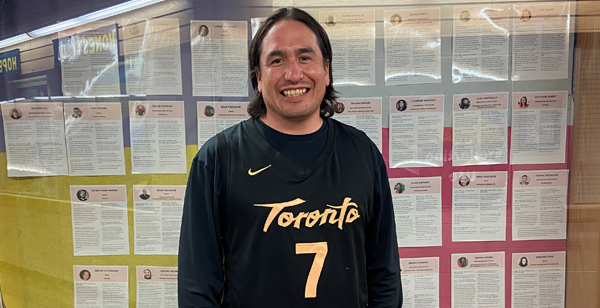 When Ezrah Swiftwolfe sees the posters of successful Indigenous people from his town, as he goes to his grade 11 classes at John Paul II Collegiate in North Battleford, something stirs inside him.

The member of Moosomin First Nation wants to achieve similar success some day.

A new poster campaign at the grade 8 to 12 school is providing motivation, encouragement, and wisdom to the young students through photos, stories and quotes from school alumni and community professionals. About 35 posters hang in a display case at the front entrance of the school, proving that familiar Indigenous faces in the community have stories of challenge and determination.

“We wanted to give our students visual inspiration of local role models who have graduated from our school, or their family members, so our students can see success stories of people just like them in the professional world,” said Shalen Fox, Graduation Coach at John Paul II Collegiate.

Fox, a member of Sweetgrass First Nation, contacted members of the community and had them respond to questions like personal obstacles they've overcome and how they balance culture and work-life, so students could be inspired by the stories behind the individuals.

A sampling of role models includes Jason Poitras, a firefighter at Moosomin First Nation, who reminds youth to prepare for the opportunities that will come their way; Serena Frank, a licensed practical nurse from Little Pine First Nation, who was inspired by her single mother who raised three children; Sean Fauchon, a Métis journeyman electrician, who overcame loneliness while working away from home to pay the bills and complete his apprenticeship; lawyer Eleanore Sunchild, nutritionist Daniel Albert and social worker Allysa Woodrow.

“I want to show our kids that they can go into more education beyond just high school. That you can go into university, or trades, and that there will be adversity and it will take hard work, but that if they want it, they can do it,” Fox said.

The students at John Paul II Collegiate, about 35 per cent of whom are Indigenous, have responded strongly to seeing familiar role models displayed at their school. The message is important for non-Indigenous students as well, said Fox.

“We want to show them that we're in the professional world. (The role models) have overcome barriers, stereotypes, trauma, they are starting to heal, they are starting to use their voice and prove to everyone that our people can be successful in society. So, it's an act of reconciliation,” he said.

Fox hopes that when the pandemic is under control, these Indigenous professionals and alumni will come to the school to speak about their experiences and further inspire the generation coming after them.