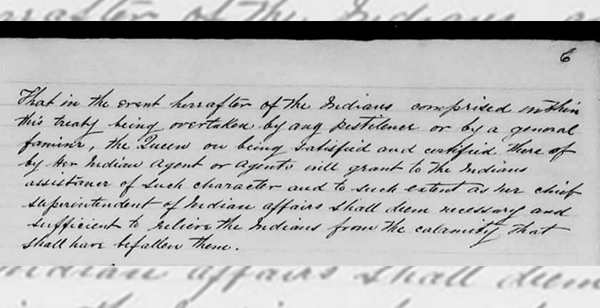 The pestilence and famine clause as written into the original manuscript of Treaty Six, The Treaty of Forts Carlton and Pitt, 1876. Photo submitted

The OTC archives collection includes primary archival documents, secondary publications, and a large oral history collection that all relate to the history of Treaties in Canada. While the COVID-19 pandemic is still impacting communities, this column will spotlight the pestilence and famine clause of Treaty Six, The Treaty of Forts Carlton and Pitt, 1876.

The pestilence and famine clause does not originate with the Canadian government. It was instead included in a list of demands submitted by Chiefs Mistawasis and Ahtahkakoop at the Fort Carlton Treaty Six negotiations. These demands were read aloud during the negotiations on August 23, 1876 and Treaty Commissioner Alexander Morris promised the new terms would be added to the Treaty text. The pestilence and famine clause as written into the Treaty Six text reads:

That in the event hereafter of the Indians comprised
within this treaty being overtaken by any pestilence
or by a general famine, the Queen on being satisfied
and certified thereof by her Indian Agent or Agents
will grant to the Indians assistance of such character
and to such extent as her chief superintendent of
Indian Affairs shall deem necessary and sufficient to
relieve the Indians from the calamity that shall have
befallen them.

According to the Crown’s literal interpretation of Treaty rights, the text of Treaty Six clearly describes an obligation to “come to the assistance of” and “relieve the calamity” facing Indigenous peoples.

The Treaty Elders’ oral histories have a more holistic interpretation of the pestilence and famine clause, and this includes the medicine chest. The request for medicines was also included in the list of demands, but Canada separated the two clauses when they were added to the Treaty text. The medicine chest clause ensures health protections for Indigenous peoples, but it also protects Indigenous medicines. Elder Peter Waskahat of the Frog Lake Cree Nation said:

Elder Waskahat, and many Treaty Elders have explained that the intent behind the medicine chest promise was to protect the health of Indigenous peoples. This included protection against European introduced diseases and also the protection of Indigenous medicines. In this respect, protection from pestilence and famine, and the protections of traditional medicines are interrelated.

Prior to the Treaty Six negotiations a smallpox epidemic occurred (1869-70) and many lives were lost. As William Francis Butler reported, “A terrible disease has swept through the Indian tribes of Saskatchewan. Small-pox had passed from tribe to tribe, leaving in its tracks depopulated wigwams and vacant council-lodges; thousands had perished …” Butler was tasked with delivering medicines to those affected by the disease, and although some people were saved, many more had died. In the face of future pestilence or calamity, the Indigenous leadership looked for protection from the Canadian authorities.

At the close of the Treaty Six negotiations, the Treaty Commissioners submitted the Treaty text to the Canadian government. Although Canada ratified Treaty Six, the Privy Council office was hesitant to accept the famine and pestilence clause. Treaty Commissioner Morris was censured for adding a “novel provision binding the Government to come to the assistance of the Indians included in the Treaty, in the event of their being visited by any pestilence and famine.”

Morris argued that assistance in times of pestilence was always given by civilized governments, but he was relieved of his commission. When Treaty Seven was negotiated one year later, David Laird was commissioner, but the famine and pestilence clause was not mentioned.

As a non-Indigenous settler originally from Saskatoon, and someone who studies Treaties, the medicine chest and pestilence and famine clauses are central to the Treaty relationship. First Nations agreed to share their land with newcomers through Treaties in exchange for promises like relief from pestilence or calamity. It is important that non-Indigenous peoples honour these promises in return.