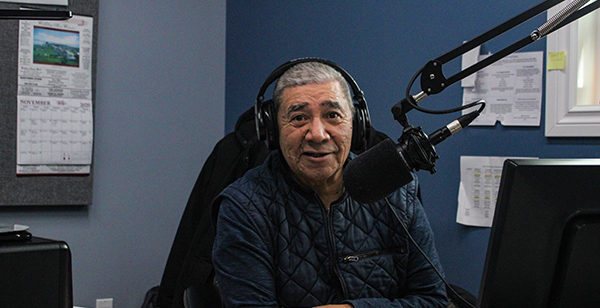 Robert Merasty broadcasts on CILX in his home community of Île à la Crosse. CILX is one of 70 community radio stations on the Missinipi (MBC) network, which broadcast in Cree, Michif and Dene. Photo by Brook Favel

Robert Merasty got his start in radio 40 years ago, doing Cree and Michif broadcasts for trappers and fishermen in northern Saskatchewan, and he was one of the founders of MBC in 1983; but he had to learn new skills to keep his community informed during the pandemic.

Homes across northern Saskatchewan have one thing in common--the radio is always on. During the pandemic, radio announcers provided updates, translated medical information, addressed misinformation, and helped Elders stay happy and safe.

Merasty works at CILX in his home community of Île à la Crosse, a Métis village with about 1,500 people, 700 kilometres northwest of Saskatoon. CILX is one of 70 community radio stations on the Missinipi (MBC) network, which broadcast in Cree, Michif and Dene.

Merasty remembers one day early in the pandemic, the sunlight was hitting his microphone and he realized that he spits when he talks. Now he cleans all the equipment in the studio before he leaves.

Interviews have to be done over the phone, so he can't read body language. And he can’t videotape the interviews for programs that were posted on the ICSI cable channel, Facebook and YouTube. “That was the best part of this whole job,” he said.

Merasty joined the community’s emergency response team. Every morning at 11, he takes off his headphones and plays music while he gets updates from the team of medical experts and community leaders. “I explain them all in English, Cree and Michif.”

Merasty responds to misinformation respectfully. “I say, ‘Ignore those comments and go to a proper source, like the Saskatchewan Health Authority or the clinic and don’t listen to people that are unreliable sources.’”

In Île à la Crosse, most Elders have limited English, so they need information in their languages.

Even though Merasty is fluent in Cree, Michif and English, translating COVID terms is challenging. First he Googles, then, “We talk to Elders to get them to explain what they think…and how they would explain it.”

“Robert knows what to say,” said Elder Aubichon. “No matter if he makes a little bit mistakes now and then. That don’t matter. He repeats himself again and he tells us.”

Hearing Merasty on radio is reassuring for Elders whose children and grandchildren haven’t been able to visit. “They get lonely and (when) we hear somebody talk Cree, we’re happy. It wakes us up,” said Elder Aubichon.

In many communities, the radio stations held fund-raisers to help families affected by COVID. Merasty remembers that in one auction, a jar of home-made jam sold for $50.

As he closes in on his 70th birthday, Merasty wants to hand his microphone to someone who can keep speaking their language on radio. “Language played a major role for me doing what I love to do.”