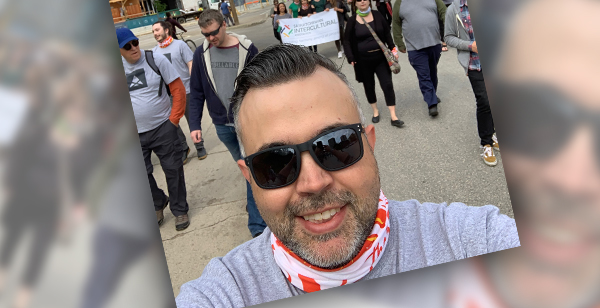 
Nick Wright is committed to reconciliation in his work and personal life.

The VP Marketing & Technology and one of three owners of the Saskatoon engineering firm, Engcomp, was born and raised in Saskatchewan. Growing up in the 80s and 90s, Wright didn’t learn in school about Indian Residential schools, treaties or the Sixties Scoop. He learned that history when his company took John Lagimodiere’s Indigenous Awareness Training course.

“I walked out of there thinking like, holy. It was disappointing because there was so much stuff that as a Saskatchewan settler, a white person, I just didn’t know,” Wright said. “I didn’t know how this all worked, and it was in my backyard.”

It really hit home when he shared his family origins with Eugene Arcand. Wright’s dad was a musician from Illinois in a band called Freddy and the Freeloaders and they sometimes toured in Saskatchewan. When he mentioned his dad’s band, Arcand knew who they were.

“This guy who is this huge figure in reconciliation, this guy that I was working up the nerve to talk to… he was like, ‘Oh yeah, I remember seeing them back in the day.’ It was just cool, because it’s not two separate things. We are all a community. We are all one world. Residential schools were here, it was part of everybody’s history… Moments like that you’re just like, ‘oh my god, this is all linked together,’” Wright said.

After the initial awareness training, Engcomp leadership began to explore and meet with people to figure out what Indigenous engagement could look like in their own work.

In 2018, Engcomp formally signed a Legacy Partnership with the Saskatoon Tribal Council (STC). Engcomp staff have volunteered at and the company has sometimes invested in STC events. Wright has presented for STC’s students or career people on what careers in engineering look like and STC has found students interested in engineering for summer jobs with Engcomp.

Engcomp’s client Nutrien played a huge part in helping them develop an Indigenous Engagement strategy, which includes eight commitments that require and allow for growth.

As Wright met more people involved in the movement, he got Engcomp involved with Reconciliation Saskatoon, a project of the Office of the Treaty Commissioner. In October 2020, he joined the group’s monthly business engagement action group, in which different businesses and organizations find ways to engage with Indigenous workers and businesses.

Wright says active listening and learning from people has been important in his reconciliation journey.

He remembers being invited to Muskeg Lake Cree Nation and talking to a lady of the community. When she asked Wright what a legacy partner does, he tried to explain, but wasn’t entirely sure. She said they wanted the same thing for their kids as everybody wants – a bright future and meaningful jobs and employment.

This lady he briefly interacted with simplified things for him. It helped establish what his journey could look like, as he found meaning in helping high school students become aware of STEM careers.

“I love to talk about Iron Man and engineering and stuff, and I can totally do that. And that’s reconciliation, that’s part of it. And that was something that I would have never known had I not tried something new,” he said.

Wright encourages people to find those moments that, “put the spark in your step and give you that motivation,” to figure out what reconciliation means for them.

“Be aware, and then figure the rest out as you go. Meet people, have an open mind and listen. And then you’ll start to find yourself in a place of reconciliation, and maybe you didn’t even know it happened, but you’re in it now,” Wright said.