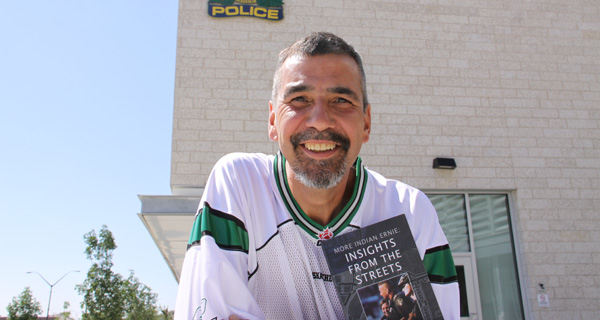 Ernie Louttit didn’t waste any time on the streets when he was a Constable then a Sergeant for the Saskatoon Police Service. He was always on the move prowling the inner city of Saskatoon and had the highest arrest rate of any officer. People on the street either loved him or hated him...and as only the third Aboriginal officer on the force when he began, he quickly earned the nickname ‘Indian Ernie.’

Well, Ernie retired several years ago and traded his uniform and weapons in for a computer and became an award winning writer. He recently released his second book, More Indian Ernie: Insights from the Streets and this book offers more of the same that made his first book so popular, straight up stories from a street cop’s view of the realities of dealing with prostitutes, street gangs, drunk drivers, mental health issues and other justice officials. The fast moving book wastes no words.

Each chapter and the stories within are captivating. Some of the crimes are familiar and contain lots of detail and after each tale, there is a lesson...either what Louttit learned or what a fellow officer or justice official or bad guy should have learned. He isn’t afraid to admit mistakes in the book. “I am a strong believer as a leader checking your ego at the door allows you to lead more effectively.  I know I had flaws and made mistakes.  They only remain mistakes if you do not learn from them,” said Louttit. “I just wanted to be forthright about my experiences and there were always things I could have done better.”

With many sensitive cases and people talked about in the book, Louttit was challenged with finding a way to tell the stories and teach lessons without exactly identifying a fellow officer or an offender. He did a great job with several memorable cases and if you knew the case, you knew the people but Louttit never once names anyone. “I did not name people in the stories criminals, lawyers, judges, and police officers because it would have taken away from the stories,” said Louttit. “Shaming, praising or naming people would not have changed the intent of the stories.  People will recognize themselves in the book and hopefully come away with a different perspective.”

Now that he has two books under his belt, Louttit is in high demand as a public speaker to groups, classes at every level of education, educators, police trainees, and more across Canada. He has also become a media go to for commentary and insight on current justice issues. According to Louttit, much of the trouble on the streets in Saskatoon and inside the jails can be blamed on gangs.

“The current situation at the correctional center is scary. I am sure the stress level for everyone except the predatory inmates is high,” said Louttit on the current uprisings, overcrowding and escape attempts at the Correctional Centre. “Gangs and drugs are the main reasons why there are so many prisoners at the centre. If it were not for them we would probably be operating at or below normal levels. As I said in the book, 2013 would have been a zero murder year in Saskatoon if not for gangs and drugs.”

Louttit is candid in the book about the physical and emotional toll that policing has had on himself and his family. Being witness to so much violence and adrenaline bursts left Louttit suffering anxiety and wild sleeps. He details the impact of a particular car chase and crash that killed an innocent married couple on Valentine’s Day as particularity difficult, waking his wife as he went through the high speed chase in his nightmares. He has never been officially diagnosed with post traumatic stress but he admits that he is only about 70 percent all right with what he has seen and been a part of.

Trauma aside, Louttit loved policing and does recommend that young Aboriginal people pursue it as a career...but for the right reasons. “Policing has many facets but the main one is and will always be to protect people. This has always been the traditional role of the warriors in so many First Nations cultures,” said Louttit. “For any young Aboriginal person wanting to try a career in law enforcement I would suggest you are adopting a traditional and valued role by doing so. It can be a tough and sometimes thankless job but by accepting the challenges you can make a difference. There is a need for a reflective police force and being part of it would honour all of us.”