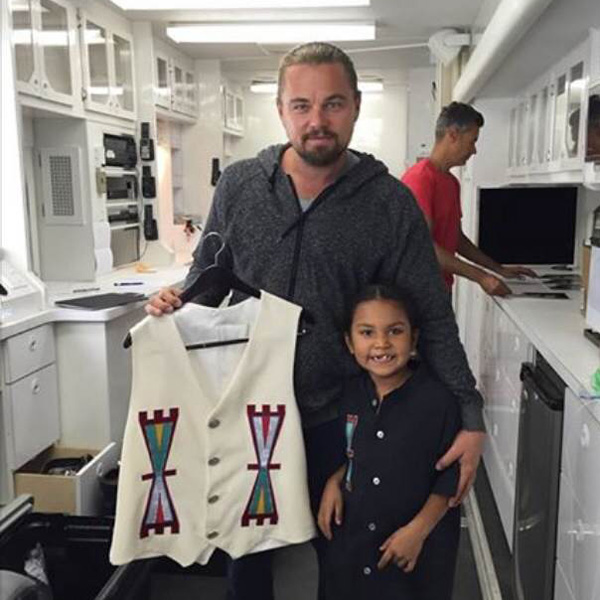 Isaiah Tootoosis on the set of The Revenant with Leonardo DiCaprio. photo supplied by Rachel Berland

Acting runs in the family as great-grandson Isaiah Tootoosis of late Gordon Tootoosis had his first experience acting in a big production movie.

Seven-year-old Tootoosis, who was born and raised in Poundmaker, Saskatchewan, got a break of a life time when a casting crew called him up to audition in Calgary for the movie, “The Revenant,” starring Leonardo DiCaprio.

Tootoosis’s mother, Rachel Berland, said when they got the call that he was chosen for the role they were ecstatic.

“Once I told him he was chosen, he screamed with joy. Afterwards we both screamed and jumped around with joy,” said Berland.

It was not until after the audition that Tootoosis decided he wanted to be an actor and become famous when he grows up.

Tootoosis loved everything about the experience and going to Los Angeles to shoot the film.

“It was fun, I made new friends,” said Tootoosis.

His character in the film is “Young Hawk” as DiCaprio’s son.

“He didn’t know Leo was an actor until he came home. He did not really care about whom he was acting with until we put a movie on with Leo in it, his eyes lightened up and instantly, ‘Hey! I know that guy, he’s my movie dad. Boy he’s such a good actor,’” Berland said of her son’s reaction.

When asked how he liked Los Angeles Tootoosis responded, “It was hot.”

He was in Hollywood for nine days to film his parts in the movie.

Berland describes her son as a dramatic boy who loves action in his life and is the eldest of four sisters.

Tootoosis said he is excited to go back to school this fall.  His favourite movie is Jurassic World and he enjoys playing hockey.

Berland says that his auntie escorted him to L.A as she was unable to take him.  They tell her that everybody loved him and he was a natural.

“He would like to continue his journey.... so hopefully something comes up for him good in the filming industry,” Berland said of her son’s aspirations.

The synopsis of the 2015 film, The Revenant, is of an explorer, Trapper Hugh Glass, played by DiCaprio, who withstands a brutal bear attack while exploring the uncharted American wilderness.

Glass is left for dead by members of his own hunting team and betrayed by his friend John Fitzgerald (Tom Hardy).

He endures unimaginable hardships as he navigates a vicious winter in a relentless quest to live and find redemption. Determined to make it home to his family, Glass must use sheer will to survive against all odds.

Tootosis did not have an agent when he went to go film but he came back home with one and now his agent will make sure he has every opportunity to get into films.

His agent also advised that Tootoosis and his mother could not disclose any information of the movie and his parts in it.