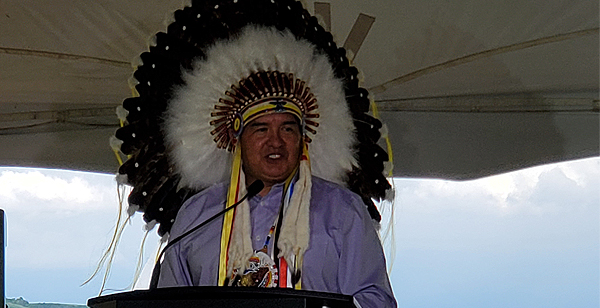 With the deadline to file a Federal Indian Day School claim days away Indigenous leaders are joining forces and calling on the federal government to set a precedent by extending the deadline and making amendments to the claim.

Anishinabek Nation, the union of Ontario First Nations, has teamed up with the Federation of Sovereign Indigenous Nations (FSIN) and released a joint statement on Wednesday in wake of the looming July 13 deadline.

“Survivors and their families are in distress, outwardly excluded from a process established to find them justice. First Nations and Indigenous representatives have called for amendments and the addressing of the many issues being experienced by Survivors; however, these calls have been ignored,” stated the release.

The update on the Federal Indian Day School Class Action website posted on June 13 still lists July 13 as the deadline for applications.
Approximately 150,000 people have filed their claims, which exceeds the previous estimate of between 120,000 to 140,000 claims.
FSIN and the Anishinabek estimate the number of Survivors to be around 200,000

The update acknowledges that some people will miss the deadline so there is a possibility of a six-month extension that will extend the deadline to January 13, 2023.
However applicants will need to apply for an extension and identify why they were unable to meet the July 13 deadline, which will then be processed and does not necessarily guarantee an extension.

FSIN and Anishinabek Nation say the deadline will not be extended for all, despite challenges from the global COVID-19 pandemic. Other issues they want the federal government to address are reports of Survivors receiving lower levels than deserved, being deprived of the ability to disclose further proof as they acquire or remember it and being unable to re-apply for their deserved compensation level.

Another area of concern the leaders want addressed is that some federally-funded Day Schools have been left off of this eligibility list.

“Canada’s approach to the implementation of the claim regime should be grounded in the Truth and Reconciliation Commission’s Calls to Action. Today, we ask Canada to consider Call #29, to work collaboratively with Day School Survivors and their families who were not included in the Indian Residential Schools Settlement Agreement,” said Anishinabek Nation Grand Council Chief Reg Niganobe in the news release.

FSIN has called on the federal government to take action before it’s too late by signing the Petition of Demand, which the Anishinabek Nation supports.

“Day School Survivors and their families have endured enough trauma already. They do not need to face these barriers while on their difficult and emotional healing journey,” said FSIN Chief Bobby Cameron in the news release. “We have schools that have been left off the eligible school list here in Saskatchewan. This is the same for other provinces and territories. This leaves Survivors who have endured the pain and hardships from these schools with no justice or closure to begin their healing journey.

FSIN and Anishinabek Nation are asking Canada, and Gowling WLG to extend the deadline and amend the eligible school lists to ensure it encompasses all of the schools so that no Survivors are left out of the claims process, which they say would be a true act of Reconciliation.